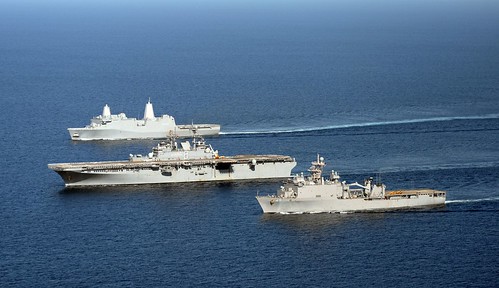 The Makin Island ARG is comprised of the amphibious assault ship USS Makin Island (LHD 8), the command ship for Amphibious Squadron (PHIBRON) 5 and the 11th MEU, as well as amphibious dock landing ship USS Comstock (LSD 45), and the amphibious transport dock ship USS San Diego (LPD 22) who is embarking upon its maiden deployment.

"These last couple of months the Makin Island ARG has taken on many challenges during this training cycle and have successfully passed every evolution with flying colors," said Capt. Vic Cooper, commander of PHIBRON 5. "The hard work, dedication, and unit cohesion shown by the Sailors and Marines have impressed me and I am confident that we will have a successful deployment and are well prepared for all missions."

"We have a fantastic Navy and Marine Corps team, and we have just completed - very successfully - a challenging and comprehensive pre-deployment training period that has prepared us for the uncertainty of our upcoming deployment," said Col. Matthew Trollinger, commanding officer of the 11th MEU. "We are ready to get underway and successfully execute any mission assigned."

The mission of the Makin Island ARG is to help provide deterrence, promote peace and security, preserve freedom of the seas and provide humanitarian/disaster response as well as supporting the Navy's Maritime Strategy when forward deployed.