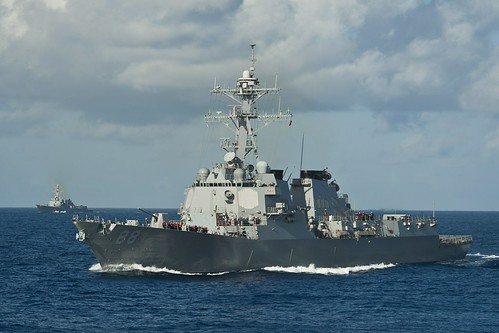 John Paul Jones is an exchange for guided-missile cruiser USS Lake Erie (CG 70), which will depart Hawaii for an extended docking ship repair in San Diego in the near future. Lake Erie will remain homeported in San Diego once repairs are complete.

John Paul Jones brings updated advanced Aegis capabilities to the surface group, and will replace Lake Erie here as a rotational Ballistic Missile Defense deployer and testing ship as part of a long-range U.S. commitment to the security and stability of the Indo-Asia-Pacific region.

Preble is arriving from San Diego to replace USS Reuben James (FFG 57), which was decommissioned in July 2013, as a MIDPAC surface combatant.

"It is a privilege to welcome USS John Paul Jones and USS Preble to Hawaii," said Rear Adm. Rick Williams, commander of Navy Region Hawaii and Naval Surface Group Middle Pacific. "I know you will bring advanced capabilities in radar and weapon systems, including Aegis ballistic missile defense and Navy Integrated Fires, and I'm grateful you're joining our team."

Williams said both ships are expected to deploy in the future to provide maritime security and forward presence in the Western Pacific.