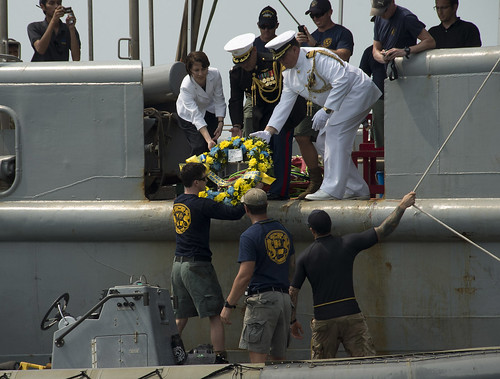 PEARL HARBOR, Hawaii - U.S. Navy underwater archeologists, in conjunction with Indonesian Navy divers, have assessed in an interim report that the wrecked vessel surveyed in the Java Sea in June is "consistent with the identification" of the World War II wreck of the cruiser USS Houston (CA 30), and that divers documented conclusive evidence of a pattern of unauthorized disturbance of the gravesite.

"We're grateful for the support of our Indonesian partners in determining the condition of the USS Houston. In my discussions with our Indonesian navy partners, they share our sense of obligation to protect this and other gravesites," said Adm. Harry Harris, commander of the U.S. Pacific Fleet.

"Surveying the site, of course, was only the first step in partnering to respect those Sailors who made the ultimate sacrifice to ensure the freedoms and security that we richly enjoy today, " he added.

As part of the Cooperation Afloat Readiness and Training (CARAT) 2014 exercise in June, U.S. Navy divers from Mobile Diving and Salvage Unit (MDSU) One Company 1-5, along with personnel from the Indonesian navy, surveyed the wreck during a joint training evolution. Over the course of 19 dive excursions, both ends of the wrecked vessel were marked with buoys and the exposed port side, as well as the deck, was documented using video recording.

After analyzing all of the data, an assessment from the Naval History and Heritage Command concluded that all of the recorded data is consistent with the identification of the wrecked vessel as the former USS Houston.

The site of the sunken ship, while a popular recreational dive site, is the final resting place of approximately 700 Sailors and Marines. The assessment noted signs that unknown persons removed hull rivets and a metal plate from the ship. U.S. and Indonesian representatives are currently coordinating to develop measures to prevent continued disturbance of the site.

During the June survey, the joint team conducted a wreath-laying ceremony on June 11 presided over by the Deputy Chief of Mission to Indonesia, Kristen Bauer, memorializing the loss.

The assessment also said that "evidence suggests the unauthorized recovery of unexploded ordnance (UXO) from the vessel raising public safety and security concerns" and that there is "active seepage of oil from the hull." Underwater archeologists are still working through data collected from the visit, and expect the final report to be completed later this fall.

Houston, nicknamed "The Galloping Ghost of the Java Coast," was sunk in combat during the World War II Battle of Sunda Strait in 1942. Capt. Albert H. Rooks, the ship's commanding officer who was killed in action, posthumously received the Medal of Honor for extraordinary heroism, while USS Houston was awarded two battle stars, as well as the Presidential Unit Citation.

For more information on the USS Houston, visit http://www.history.navy.mil/danfs/h8/houston-ii.htm.

For more information on the joint U.S.-Indonesia dive on Houston in June, visit http://www.navy.mil/submit/display.asp?story_id=81641 and http://www.navalhistory.org/2014/06/12/dive-on-houston-day-4-the-surveys-final-day.