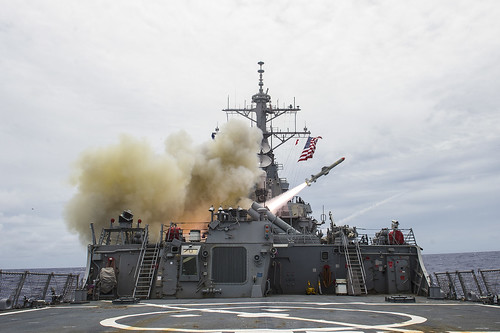 The participating sinking exercise (SINKEX) units included the U.S. Navy, Air Force and Marine Corps, each of whom were able to gain proficiency in tactics, targeting and live firing against a surface target at sea. “This exercise provided an important opportunity for realistic at-sea training with live ordnance, in conditions that could not be duplicated otherwise,” said U.S. Navy Rear Adm. Russell Allen, the U.S. Pacific Fleet Valiant Shield exercise lead. “This particular event enhanced our collective combat readiness and allowed us to improve our interoperability by working together to achieve specific training objectives.”

Former Navy vessels used in sinking exercises (SINKEX) are prepared in strict compliance with regulations prescribed and enforced by the Environmental Protection Agency, including the requirements that the event be conducted in waters a minimum of 1,000 fathoms (6,000 feet) deep and 50 nautical miles from land and that the area be confirmed clear of any marine mammals that might be harmed during the SINKEX.

"The SINKEX is conducted on the front end of Valiant Shield mostly so we can safely sink the hulk involved," said Rear Adm. Mark Montgomery, commander, Battle Force 7th Fleet. "It allows us to test both systems and tactics, techniques and procedures we developed for the employment of those systems in a live-fire environment. It's a mixture of Navy, Air Force and Marine Corps weapons systems from surface ship, fixed-wing, and rotary-based platforms. It provides an excellent opportunity for all three services and all the elements of the carrier strike group to work jointly to flex their firing chains and demonstrate their ability to release weapons accurately, safely and in an efficient manner."

USS Fresno was the fourth ship in the Newport class of tank landing ships and was named for the city and county in California. The ship was assigned to the Amphibious Force, Pacific Fleet, and homeported in San Diego. Fresno participated in amphibious training operations along the West Coast of the United States and several deployments to the Western Pacific. Fresno saw extensive service during the latter stages of the Vietnam War, and earned two engagement stars for service.

Valiant Shield is sponsored by U.S. Pacific Command. It is a U.S.-only, field training exercise that focuses on detecting, locating, tracking and engaging units at sea, in the air, on land, and in cyberspace in response to a range of operational scenarios. Lessons learned can then be used to sustain and improve upon options to defend U.S. interests and those of its allies and partners.