Cooks from the Valley Sizzle Up Veterans Day Celebration 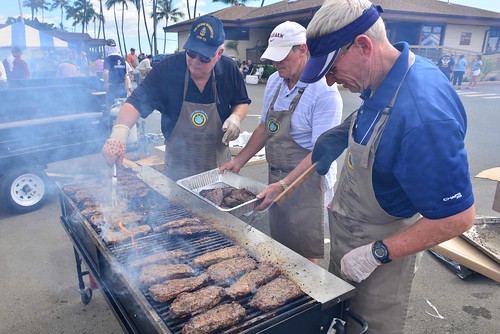 Cooks from the Valley founder Thomas Anton, an attorney, started the organization two decades ago with their first steak cook off on board the Kidd class guided-missile destroyers USS Chandler (DDG 996), and in 2002 debut the grilling event on larger scale aboard the aircraft carrier USS John C. Stennis (CVN 74) to continue saying thank you to the men and women who serve in the United States Armed Forces.

“Adm. Robert Natter (retired) made it possible for us to do this on carriers,” Anton said. “We’ve been to 5th Fleet a couple of times, Naples and we try to do this as often as we can at diverse locations.

“We see the benefit of doing this from the morale, bringing a taste of home to a lot of people that don’t get it like on board a ship,” said Anton.

In the past month, Anton’s Cooks from the Valley volunteers have traveled back and forth across the Pacific Ocean to Guam to embark aboard the aircraft carrier USS George Washington (CVN 73) while out to sea, Commander Fleet Activities Yokosuka, Japan and ended their journey at Joint Base Pearl Harbor-Hickam on Veterans Days.

“It’s all worth it to see the smiles on the kids face,” Anton expressed. “I’ve had mothers come up and say my child has never been able to have steak like this in their life and that’s fun to see.”

The volunteers shared that this was the best set up they have ever encountered at a steak cook off, and applaud Lara Katine, MWR special events director, for all her endless help in organizing the event.

“Cooks from the Valley main priority from the very beginning was ‘How do we thank these service members?’” Katine said. “They do not want any recognition or publicity other than just a simply ‘Thank you.’

“That’s very unusual and sincere,” Katine continued to share. “They are taking every opportunity to share their gratitude.”

In addition to the steaks grilled at the Veterans Day celebration event, 973 preorders were made for service member on duty for a representative from their command to pick up at the Hickam Officers Club, Katine said.

“Today’s event has truly been a joint military effort from all the commands at Joint Base Pearl Harbor-Hickam to include the AMC Passenger Terminal, galleys throughout the base, food service office and so many more.”

Capt. Stanley Keeve, Jr., JBPHH commander, attended the event and met with Anton, commented that it is always great to see people giving back to a community that works so hard day and night to keep America safe.

“Cooks from the Valley is a group of civilians, who delicate their time to giving back, which is fantastic,” Keeve said.

Maria Ruiz, a military spouse, said she came to the barbecue to listen to live music and give thanks to the hundreds of veterans in attendance.

“I was unaware that Cooks from the Valley were here providing steaks, but very grateful for their support,” Ruiz said. “Today is a great to be out in the sun and celebrate Veterans Day.”

Hospital Corpsman Seaman Daniel Tanner, assigned to Navy Clinic Hawaii, said there is nothing better to do than to volunteer your time for a good cause.

“It’s been absolutely fantastic today and love to give back,” Tanner shared. “It’s always nice to give back to those who have already given.”

Anton said he hopes Cooks from the Valley will continue to have success and thrive in the near and distant future.

“You never know how much you are worth until you give yourself away,” said Anton.