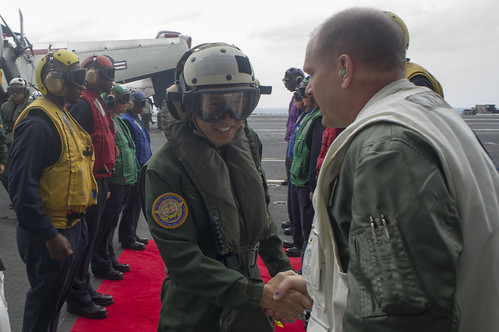 During the visit, Thomas and Funada met with Rear Adm. John Alexander, commander, Battle Force 7th Fleet and Capt. Greg Fenton, commanding officer of George Washington, as well as other commanders, to review the performance of the George Washington (GW) Carrier Strike Group and JMSDF counterparts and discuss future plans for cooperation.

The 2015 Keen Sword exercise improved bilateral cooperation significantly when JMSDF Takanami-class destroyer JS Sazanami seamlessly integrated with the GW strike group during a bilateral training cruise in October and November leading up to Keen Sword. To further increase the bilateral integration, JMSDF Commander, Escort Force (CCF) 2 operated as the sea combatant commander for the exercise, employing tactics and controlling the scheme of maneuver for the strike group's escort ships.

"The purpose of today's visit was to discuss how we've performed in Keen Sword," said Alexander. "Looking at the lessons learned over the course of the exercise, we were able to look at a number of tactical lessons learned, which we believe can be applied in the future."

"Seventh Fleet works closely with the JMSDF every single day," said Thomas. "From advanced combat scenarios at sea to cooperative information sharing. Keen Sword is a culmination of our steady and persistent efforts to ensure smooth interoperability and close coordination."

"Japan is a very strong ally of ours," said Alexander. "Improving the interoperability between the U.S. Navy and the JMSDF is important, and we will continue to do so."

Keen Sword is a joint bilateral at-sea training exercise held since 1986 involving Japan Self Defense Forces and U.S. military forces. This year's exercise involved multiple scenarios that occurred in a number of locations throughout Japan, including the waters and airspace around Japan.

"It was a great visit," said Thomas. "We demonstrated the most critical tactical capabilities of the carrier strike group in a very short period of time. You can only do that with great Sailors working closely with our great ally."

"It's easy to see that George Washington and its crew, along with the air wing, come together to make a finely-tuned machine," said Thomas. "The hard work they do all year long really shows."

George Washington and CVW 5 provide a combat-ready force that protects the interests of its allies and partners in the Indo-Asia-Pacific.