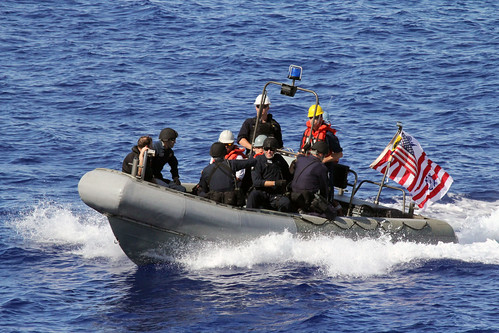 A small boat team of Sailors and Coast Guardsmen embarked aboard USS Michael Murphy (DDG 112) prepare to board a fishing vessel to conduct an inspection as part of the Oceania Maritime Security Initiative (OMSI). (U.S. Navy photo)

Support of the Oceania Maritime Security Initiative (OMSI) was provided in late October and early November after the ship departed Pearl Harbor, Hawaii, for its first deployment to the Western Pacific.

“The OMSI mission was a great way to start our maiden deployment and provided an excellent opportunity for the crew to immediately begin working on a mission that has a direct, profound impact in the critical Pacific region,” said Cmdr. Todd Hutchison, Michael Murphy’s commanding officer. “It was an honor sailing with the embarked United States Coast Guard personnel for the OMSI mission. Their professionalism and dedication to protecting and serving the Oceania island nations is impressive and is a tremendous benefit to this region of the Pacific.”

By embarking foreign Law Enforcement Officers from the Pacific Island Nations of the Marshall Islands and the Federated States of Micronesia, and conducting boardings under their authority, Michael Murphy, Helicopter Maritime Strike Squadron (HSM) 37 Det. 4 and the embarked USCG detachment assisted these nations in maintaining the rule of law and protecting their national sovereignty.

“OMSI is a unique joint mission that leverages surface naval assets with embarked aircraft in conjunction with USCG Maritime Law Enforcement expertise and foreign law enforcement officers to project power and establish a hard, visible presence of maritime governance in the extremely remote expanses of the Oceania Region,” said Lt. Craig Dente, command duty officer at the USCG 14th District Command Center who served as the embarked USCG liaison officer for Michael Murphy's OMSI mission. “By establishing and maintaining a robust presence in the vast expanses of the Central Pacific through the OMSI mission, the United States Navy and United States Coast Guard stand together in the deterrence of the global threat posed by illegal, unreported, and unregulated Fishing, as well as other transnational crimes.”

The Michael Murphy is named in honor of Lt. (SEAL) Michael Murphy, who was posthumously awarded the Medal of Honor for valorous service during Operation Red Wings in Afghanistan in 2005. The ship was commissioned in Oct. 2012 in Murphy’s home state of New York.

Michael Murphy is on deployment to the 7th Fleet area of responsibility supporting security and stability in the Indo-Asia-Pacific.