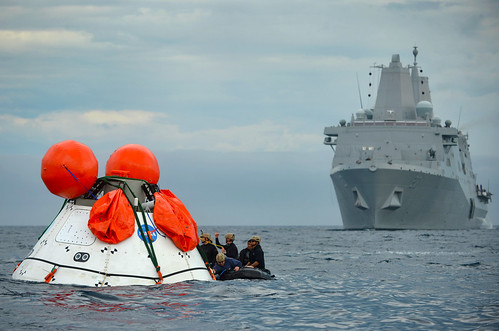 Anchorage will use its amphibious capabilities to conduct an at-sea recovery of the Orion space capsule.

NASA operatives will launch Orion into Earth's orbit and wait for it to splash down into the Pacific Ocean for recovery. The launch window for this NASA mission terminates Dec. 19. Once launched, the capsule will take four hours to orbit the earth twice before it is recovered. The total duration of the operation from launch to recovery is entirely weather dependent and relies on numerous variables.

Anchorage will use a specially trained bridge team that will be on watch for the operation. Divers aboard small boats will maneuver alongside and rig tending lines to guide the capsule to Anchorage as the ship safely operates on station.

"It is a very complex, highly-integrated team of Navy divers, meteorologists, flight crews, the well-deck personnel and the bridge watch standers on Anchorage," said Lt. Keith Tate, operations officer. "All of this will hopefully culminate with the historic capsule recovery, which is something the Navy hasn't been involved with for almost 40 years."

Sailors aboard Anchorage have been training for several months and this mission has been a consistent focus for the crew dating back to late spring.

NASA crewmembers will provide real-time tracking information of the capsule once it is launched. They will be in constant communication with the Johnson Space Center in Houston to notify the ship of any capsule deviation. NASA crew members will also guide the ship incrementally closer to the recovery point.

"We want to get ourselves into the right mindset," said Jeremy Graeber, NASA recovery director. "This is a historic event we're all getting to be part of and I want everyone to think in those terms. We want to be safe first, diligent about our work and make sure we do this as well as they did it in 1975."

NASA will serve as a liaison to Navy divers for all the hardware that is connected to the spacecraft. If there are any issues with the hardware, the designer on board Anchorage can tend to it accordingly. NASA crew members are also managing how the capsule gets brought in, how it's set down and where it's safe in the ship. After the equipment is secured a Lockheed Martin team will download data off of the spacecraft.

"All of us who have been here since the beginning are excited to see this day come," Tate said. "We're hoping for a safe, successful evolution. It's something historic and we're all proud to be apart of it."