USS O'Kane to Return from Deployment 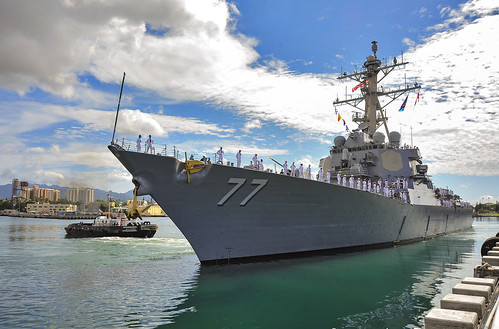 PEARL HARBOR - The Arleigh Burke-class guided-missile destroyer USS O'Kane (DDG 77) will return to its homeport Dec. 5 from a nine-month deployment to the Arabian Gulf and Western Pacific Ocean.

The ship and crew of nearly 280 Sailors, assigned to Destroyer Squadron (DESRON) 31, conducted goodwill activities with partner nations along with various presence operations with two carrier strike groups during the ship's deployment.

"I am extremely proud of O'Kane's crew. Through their hard work and dedication, we were able to successfully complete mission tasking on deployment," said O'Kane's Commanding Officer Cmdr. Gina McCaine.

During a change of command ceremony at sea Nov. 19, McCaine relieved Cmdr. James Juster as commanding officer of O'Kane.

"O'Kane's crew members have been tremendous ambassadors of the Navy and United States. Their teamwork and camaraderie have been impressive," Juster said.

While deployed in the 5th and 7th Fleet areas of responsibility, O'Kane Sailors participated in community service projects in Bahrain, United Arab Emirates, India and Guam by tutoring special needs children, assisting with general community clean up, and participating in sporting and social events.

Also during the deployment, the ship's visit, board, search and seizure (VBSS) team safely conducted 47 maritime interdiction operations while in the 5th Fleet AOR.

O'Kane is named for Rear Adm. Richard O'Kane, a submarine commander in World War II who received the Medal of Honor for his service aboard USS Tang (SS-306). O'Kane directly participated in more successful attacks on shipping than any other submarine officer during the war. The ship's motto is "A Tradition of Honor."

The ship is homeported in Hawaii and is part of Naval Surface Group Middle Pacific and U.S. 3rd Fleet.