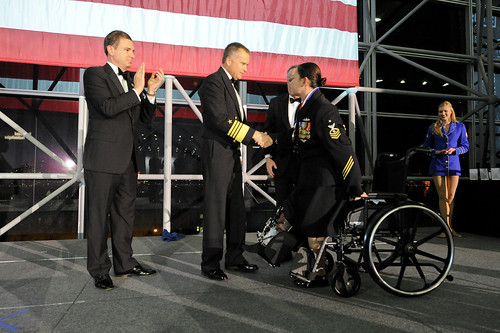 Hockenberry, who normally serves as the leading chief petty officer in the Total Fleet Force Manpower and Personnel directorate (N1) on the staff of Commander U.S. Pacific Fleet, has been on an individual augmentee assignment the past six months and was the Navy’s recipient of the award.

This annual award recognizes outstanding commitment, service and achievements of individuals, of all branches of the armed forces, who have shown extraordinary dedication to the country.

"I'm honored to receive this recognition alongside all these other outstanding service members," said Hockenberry. “What I did isn’t special. I believe that anyone in my shoes would be able to accomplish the same things.”

“I understand uniquely, on a small scale, what our troops go through each day,” said actor Dennis Haysbert, who has been on multiple USO tours. “I just want to thank each and every one of you for doing what you do and putting your lives on the line each and every day.”

During the USO awards ceremony, Adm. James A. Winnefeld Jr, vice chairman of the Joint Chiefs of Staff, praised the military families and the gold star mothers for serving a critical role in the military today, and the USO and all their volunteers.

"Thank you to everyone associated with the USO for doing what you do," said Winnefeld to the more than 800 guests. “The military is indeed a family business.”

During the gala, Brian Whiting, president and chief executive officer at USO of Metropolitan New York, noted the importance of all the service members and their families, who have made significant achievements in their service careers.

"Our honorees this evening are some of America’s greatest heroes and industry leaders,” said Whiting. “They fought on the battlefield, protected and supported our troops on the home front and some have made incredibly personal sacrifices to preserve our safety and our way of life.

“As our troops deploy around the world, the USO will be there not matter what. It’s our way that we can express gratitude for their sacrifice," Whiting added.

The George Van Cleave Military Leadership Award is a way of publicly honoring and thanking the outstanding commitment, exceptional service, sacrifice and achievements of service members that have shown extraordinary dedication to their country. Reflecting the enduring legacy of the U.S. military and mission of the USO, the award is given to one individual from each branch of service, who through their selfless commitment to their country, inspires others and uplifts the spirits of their comrades, families, and American people.