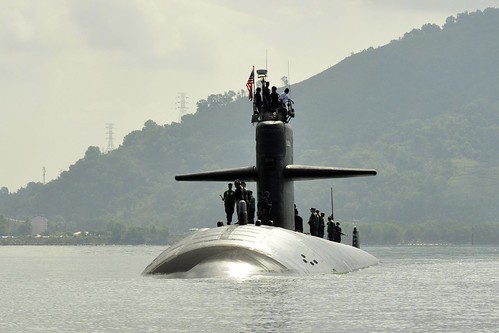 With a complement of more than 140 officers and men, Louisville showcased the latest capabilities of the submarine fleet in its latest mission.

"They have worked tirelessly to prepare for and execute the first three months of our six-month deployment, and I could not be prouder of their accomplishments. I know that my officers and crew are looking forward to some well-deserved liberty here in Okinawa," said Figgs.

Measuring more than 360 feet long and weighing over 6,000 tons when submerged, Louisville is one of the stealthiest, most modern attack submarines in the world.

Louisville's stealth, mobility, endurance, and firepower allow this covert, multi-mission platform to operate independently or in conjunction with a Carrier Strike Group or joint forces to support the interests of the United States wherever and whenever needed.

"Each and every member of our crew has devoted a lot of time, hard work, and energy towards preparing themselves and Louisville for this deployment," said Chief of the Boat, Master Chief Fire Control Technician Larry Williams. "It is only because of the crew members that we are successful as a team. I am excited for the crew to be able to do what a lot of them have joined the Navy to do: see overseas countries and represent the U.S. Navy well. This port call is definitely well deserved by the crew, and each and every one of them has been looking forward to the visit."

For some of Louisville's crew, a visit to Okinawa means more than time at the beach.

"My family and I have studied Okinawa's Shuri-ryu martial arts for more than ten years," said Culinary Specialist Seaman Jarritte Bryant, of Columbia, South Carolina. "After so much hard work, I plan to take advantage of this great opportunity to visit a real-life dojo and meet one of the order's masters!"

Louisville is the fourth United States ship to be named for Louisville, Kentucky. Commissioned on November 8th, 1986, at Naval Submarine Base New London, Connecticut; Louisville is the 35th nuclear powered fast-attack submarine of the Los Angeles class.

Louisville is homeported at Hawaii's Joint Base Pearl Harbor-Hickam.