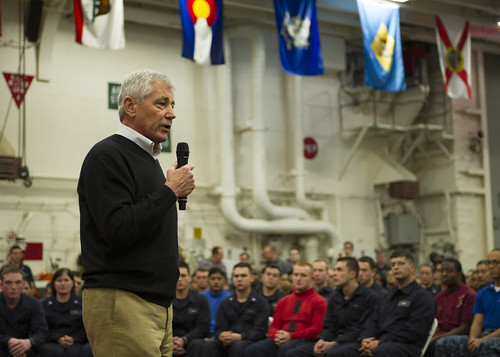 Secretary of Defense Chuck Hagel speaks with Sailors aboard USS America (LHA 6) during an all-hands call in the ship's hangar bay at sea in the Pacific. (U.S. Navy/MC2 Jonathan A. Colon)

During his time aboard, Hagel held an all-hands call where he thanked the crew for their hard work and dedication, spoke about the ship's accomplishments during its recent sail around South America, and the importance of people, capacity and partnerships.

"I was in Chile a couple of months ago, and I heard about what you all accomplished on that swing around South America - not only how impressed everyone was with the ship and its capabilities, but you represent the best of America," Hagel said to the crew. "You've lived up to the name of this ship in every way, so thank you."

After his initial address, he answered questions and took photos with the crew.

"I appreciate that a person in such a high position would recognize the accomplishments we've made on USS America and that he would go out of his way to meet with us," said Hospital Corpsman 3rd Class Matt Hessamfar, from Virginia Beach, Virginia. "It was truly an honor to meet him."

After the all-hands call, some Sailors had the opportunity to eat lunch with Hagel. Personnel Specialist 1st Class Quiana McGrew, from Silas, Alabama, was one of those Sailors.

"It is refreshing to know how personable the SECDEF really is. As we told our stories about where we came from and some of our experiences, it was interesting how there were similarities in each of our stories. Each one of us had something in our histories that he could relate to," McGrew said. "It was not something I expected from someone at his level. He was genuinely interested, and that made it worthwhile for me."

America is currently underway conducting a variety of testing and evolutions as part of its preparation for final contract trials later this year.

America is the first ship of its class and is optimized for Marine Corps aviation.