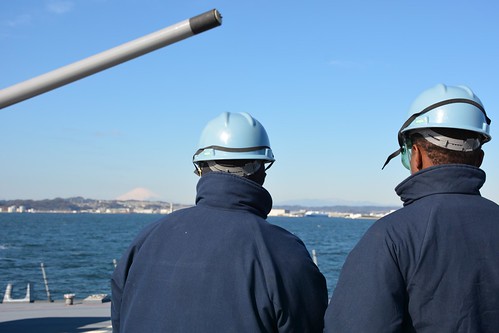 The purpose of the TRAV is to validate the ship has the required training, qualifications and critical schools to support future operations. Instructors from Afloat Training Group (ATG) Western Pacific trained and evaluated the crew through drills and tactical-based scenarios to ensure the ship was capable of executing missions in all warfare areas.

In 16 weeks, the ship completed qualifications in damage control, navigation, anti-terrorism/force protection, air/surface/electronic warfare, medical, strike warfare, and several other mission areas. Lassen scored more than 90 percent in 14 out of 16 events and is qualified through 2016.

“The mass casualty scenarios we ran felt very real” said Fire Controlman Third Class Tiffany Hopkins. “Running the drills as if there is an actual fire or flooding prepares us to react in the event of a real life casualty on board the ship”.

Embarked for the entirety of the underway is a detachment from the 'Warlords' of Helicopter Maritime Strike Squadron (HSM) 51. The two MH-60R helicopters will conduct daily intelligence, surveillance, and reconnaissance missions in support of Lassen’s tasking, as well as anti-submarine warfare and search and rescue operations.

Lassen is one of seven Arleigh Burke-class guided-missile destroyers assigned to Destroyer Squadron 15 and is permanently forward-deployed to Yokosuka supporting security and stability in the Indo-Asia-Pacific.