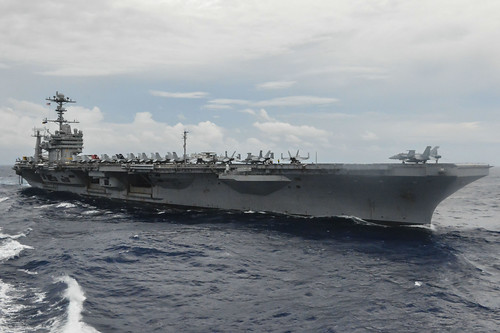 The Battle 'E' is awarded annually to ships who display the highest conditions of preparedness and capabilities for wartime readiness. The award is given after evaluations and inspections have determined the winning ship's performance and recognizes sustained superior performance in an operational environment within a command.

"This is the second year in a row, which is an amazing accomplishment," said Capt. Timothy Kuehhas, George Washington's commanding officer. "Your hard work, dedication and leadership has once again been recognized fleet wide and is most deserving. Congratulations and well done."

George Washington competed against carriers assigned to the west coast for the Commander, Naval Air Forces Pacific's Battle 'E'. Carriers from the east and west coast are evaluated by Afloat Training Group and other inspection teams during a series of certifications and inspections, and one from each coast is awarded the Battle 'E'.

"I am very impressed and happy about the ship receiving this award. I am also proud to be a part of the George Washington team," said Aviation Boatswain's Mate (Fuel) 1st Class Kendrick Menor, from Honolulu. "It is hard for a ship to earn two awards like this back to back, but we did it."

According to Information Systems Technician 3rd Class Demarius Richardson, from Waldorf, Maryland, the George Washington crew has shown true pride and dedication to maintaining the ship's readiness and will continue to do as such.

"This is a great symbol of our professionalism," said Richardson. "We do a lot of the same training over and over, but it just proves that we are doing the right things and we are working hard to make [George Washington] the best ship."

George Washington (CVN 73) and its embarked air wing, Carrier Air Wing (CVW) 5, provide a combat-ready force that protects and defends the collective maritime interests of the U.S. and its allies and partners in the Indo-Asia-Pacific region.