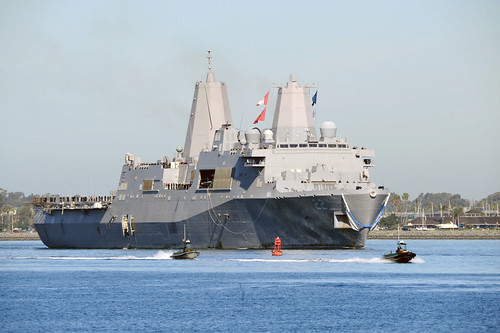 The only ship in the U.S. Navy stationed in its namesake city departed for the seven-month, 40,000 nautical mile deployment, as part of the Makin Island Amphibious Ready Group (ARG) on July 25.

"San Diego deployed with a new, very young team yet was always up to answer the call in support of fleet commanders," said USS San Diego Commanding Officer Capt. John Menoni. "There's no doubt in my mind that the Navy-Marine Corps team on San Diego is among the best in the Navy."

San Diego's Engineering Department was able to conduct several major maintenance and repair evolutions while at sea ensuring the ship's mission was uninterrupted. This allowed for a 26-day full-power run from the northern Red Sea to Pearl Harbor, Hawaii, which can be a challenging feat for a ship of any class.

"Engineering department performed minor miracles on a daily basis to ensure USS San Diego was always mission ready," said Lt. Cmdr. Paul Dubose, San Diego's chief engineering officer. "These are the best Engineers I have worked with in my 23 years in the Navy; they do the hardest work on the ship and make my job easy."

"I am extremely proud of, and grateful for, the team I have in Operations Department," said Lt. Cmdr. John Glover, San Diego operations officer. "My bridge, combat, and intelligence teams performed steadily and responded very well to a very fluid environment. My Sailors are professionals and are among the best in the fleet!"

San Diego's 410 Sailors and Marines, along with more than 575 Sailors and Marines from the embarked 11th Marine Expeditionary Unit (MEU) conducted maritime security operations and theater security cooperation exercises and events in the U.S. 5th and 7th Fleet areas of operation.

"I give all of the credit to our blue green team," said Menoni. "Our Sailors and Marines came together as a truly cohesive unit, that showed day in and day out, from pre-deployment exercises to the final day of deployment. The strength of character they displayed every day was awe inspiring."

Sailors and Marines serving aboard San Diego assisted in the evacuation of three National Oceanic and Atmospheric Administration (NOAA) scientists as part of the Makin Island ARG and 11th MEU emergent recovery operation at the Papahnaumokukea Marine National Monument.

The heavily integrated San Diego and 11th MEU team also participated in Cougar Voyage 2014 with the Royal British and French Navies; Red Reef 15 with Saudi Arabian Forces; and took part in sustainment training exercises in Kuwait and Djibouti. They also spent an extended period of time as a quick reaction force to help out American citizens at the U.S. Embassy in Sana'a, Yemen while ensuring the safety of American citizens in the U.S. 5th Fleet area of operation.

The Enlisted Surface Warfare qualification was awarded to 204 Sailors and 57 Sailors were advanced to the next pay grade.

Sailors and Marines aboard San Diego also took part in a variety of community relations activities in two countries while on deployment. These events included spending time with underprivileged children in Hong Kong, a soccer match with a Royal Jordanian Navy team, and a familiarization visit to a mosque.

During the deployment, San Diego made port visits to Aqaba, Jordan, and Port Khalifa, UAE, for routine maintenance; Hong Kong and Pearl Harbor, Hawaii, for liberty.

Ninety friends and family members joined the Sailors and Marines on the final leg of the deployment, to experience shipboard life as part of a scheduled Tiger Cruise.

"You didn't just meet the standards, you set the standards. Now that you're back San Diego will be whole again because the city has its ship back," said Ponds. "Everything that you do and everything that you've touched has been golden, but the ship would be nothing without the Sailors and the Marines that man the deck. You are the greatest that our nation has to offer."

The ship is named for the city of San Diego, which has a large Navy and Marine Corps population, and pays tribute to the people of "America's Finest City" and its leaders for their constant support of the military. The ship was commissioned during a ceremony in San Diego, May 19, 2012.

During deployment San Diego completed five full vehicle and equipment offloads in five countries, received 4.1 million gallons of fuel produced 5 million gallons of water, conducted 40,000 man-hours in repairs, completed a full vehicle and equipment washdown in three and a half days vice the normal seven, flew 1821.2 flight hours, 2593 passenger movements, 12,146,725 lbs. of cargo, took on 908 tons of food, 507 tons in stores, parts and supplies, 65 tons of mail, completed 20 replenishments at sea and 37 well deck operations, and was at sea for 200 days out of a 216 day deployment.

San Diego, deployed as part of the Makin Island Amphibious Ready Group with the 11th MEU, returned to homeport San Diego following a seven-month deployment to the Western Pacific and the U.S. Central Command areas of operation. 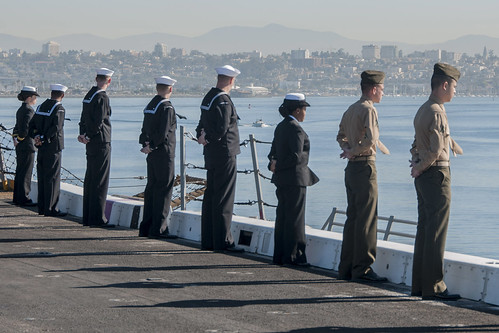