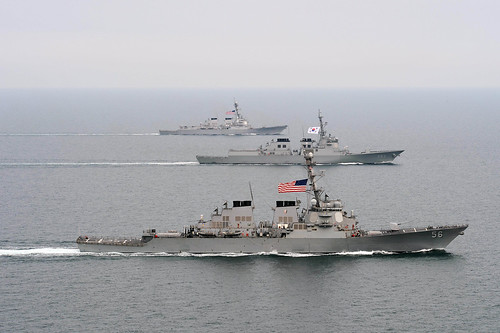 Members of the ROK navy welcomed the guided-missile destroyers USS Michael Murphy (DDG 112), USS John S. McCain (DDG 56) and the littoral combat ship USS Fort Worth (LCS 3) to Pyeongtaek, while the guided-missile destroyer USS Lassen (DDG 82) arrived in the city of Donghae. The Safeguard-class rescue and salvage ship USNS Salvor (T-ARS-52) also arrived in Chinhae. The port visits provided members of both navies the opportunity to conduct theater security cooperation engagements and rehearse training scenarios for the Foal Eagle exercises, which run from March to April this year.

"Foal Eagle is a critical event for our strategic ROK-U.S. alliance," said Capt. Shan Byrne, Commodore, Destroyer Squadron 15. "It also enhances our capabilities and interoperability with the ROK Navy. This continues to support our commitment to stability and security in this region."

Exercise Foal Eagle in an umbrella of regularly-scheduled, annual exercises that are the culmination of many months of planning and based on realistic training scenarios. The naval portion of the Foal Eagle exercises take place in international waters around South Korea and features a full spectrum of maritime operations.

“With two destroyer squadrons now forward deployed in the Asia-Pacific and participating in Foal Eagle, there is an even greater opportunity to work alongside and learn from our counterparts in the Republic of Korea Navy," said Capt. H. B. Le, Destroyer Squadron 7 deputy commodore and embarked on Lassen during the exercise. "Conducting high-end, realistic naval operations at-sea with our Korean allies is crucial as we work together to tackle dynamic maritime security challenges."

Michael Murphy, John S. McCain, and Lassen, each with a crew of about 300 Sailors, are conducting routine patrols throughout the Indo-Asia-Pacific region in support of the U.S. 7th Fleet. As multi-mission platforms, these ships can carry out independent operations or operate in conjunction with a carrier strike group or other partner navies to conduct maritime security and stability operations across the region.

The ship is currently on a 16-month rotational deployment to the Indo-Asia-Pacific region and is making its inaugural visit to Korea to participate in Foal Eagle alongside ROK Navy counterparts.

"This year's Foal Eagle bilateral naval exercises demonstrate the strong and continuing partnership between the ROK and U.S. navies," said Cmdr. Lee, Jong, Sik, of the Republic of Korea Fleet. "We are bringing together valuable expertise and knowledge from both navies and applying these skills in a realistic training environment."