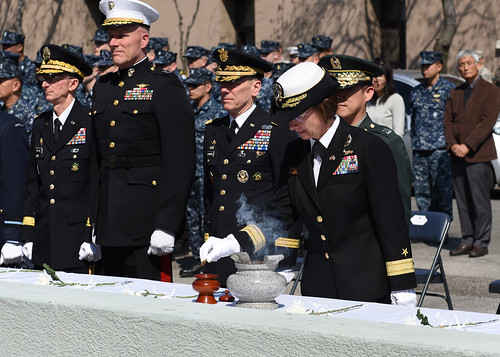 Rear Adm. Lisa Franchetti, commander of U.S. Naval Forces Korea, burns incense in front of a memorial dedicated to the Korean sailors lost during the sinking of ROKS Cheonan (PCC-772) as part of a memorial service at the CNFK headquarters in Seoul. (U.S. Navy/MC1 Abraham Essenmacher)

The 1,200-ton ship broke into two from an explosion, suspected to be from a North Korean torpedo, on March 26, 2010, while operating in waters west of the Korean peninsula. Of the 104-man crew, 46 Korean Sailors perished in the incident, along with an ROK navy diver who lost his life during the subsequent rescue efforts.

"The tragic loss of ROKS Cheonan and her brave Sailors is a solemn reminder of the human cost of freedom," said Rear Adm. Lisa Franchetti, commander of U.S. Naval Forces Korea. "We shall never forget the 46 fallen Sailors of the Cheonan and their UDT rescuer, nor will we forget the pain and sorrow experienced by their families and shipmates. The legacy of these Sailors will live on in all those who serve as part of our alliance with the Republic of Korea."

"It was a sad loss for us, but out of the overwhelming sadness, was born in the minds of the people the respect for the professionalism and patriotism demonstrated by the 46 warriors of the Cheonan," said Rear Adm. Choi. "Their legacy lives on and serves as a reminder to the people that security awareness can never be over emphasized."

Cheonan's stern was raised on April 15, 2010, and recovery efforts concluded on Aug. 25 of that same year. Both the ROK and U.S. navies contributed to the rescue and recovery efforts of ROKS Cheonan, including USNS Salvor (T-ARS 52), USS Harpers Ferry (LSD 49), USS Curtis Wilbur (DDG 54), and USS Lassen (DDG 82).