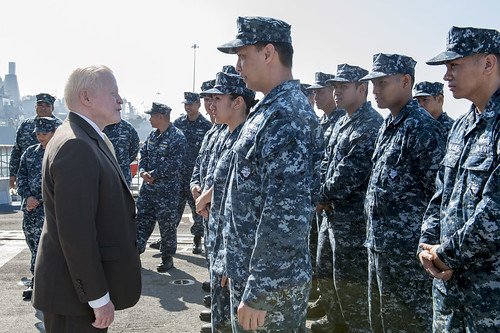 SAN DIEGO - Ambassador of the Republic of the Philippines to the United States Jose L. Cuisia Jr. and his distinguished guests visited the guided-missile destroyer USS Kidd (DDG 100) at Naval Base San Diego, March 20.

"There is a long-standing relationship we have between the United States and the Philippines," said Cmdr. T.J. Zerr, Kidd's commanding officer. "It is a real honor for him to take time out of his busy schedule to come to a U.S. ship, our ship, and meet our Sailors."

Cuisia said he remembers how the U.S. military helped the Philippines during the Typhoon Haiyan disaster in 2013.

"During this major incident, the Philippines worked closely with the U.S. as they offered humanitarian assistance," said Cuisia. "We saw a type of friendship that was evident in the way they helped save lives and ensure our people would be provided the best assistance; we can't thank you enough for all the support."

During the visit, Cuisia and his guests met with Capt. Brian K. Shipman, commander, Destroyer Squadron 21 (DESRON 21), and Zerr on board Kidd where they presented Cuisia with a command ball cap and coin. Besides the crew of Kidd, other DESRON-21 Sailors were also able to speak with Cuisia during a meet-and-greet on the ship's foc'sle.

"It was great to have the ambassador aboard to show his appreciation for what the U.S. Navy and the United States have done in cooperation with the Philippines and to continue that relationship," said Senior Chief Sonar Technician (Surface) (SW) Anna Dapiaoen, who is stationed aboard the guided-missile destroyer USS Wayne E. Meyer (DDG 108).

Cuisia said he enjoyed hearing all the great comments about the Filipino Sailors serving in the Navy and was very proud of their service.

"I want to extend my congratulation to you all for the service you are rendering," said Cuisia. "Thank you for the pride you have brought to the Philippines because of your ancestry as Filipinos; you have shown that you can be depended upon and I wish you all the best in your careers and that you continue to serve with dedication and integrity."