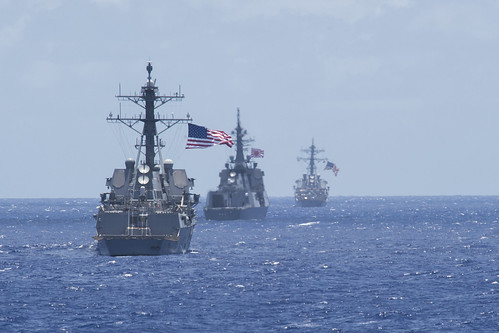 Multi-Sail is an annual DESRON 15 led exercise that is designed to assess combat systems, improve teamwork and increase warfighting capabilities in the U.S. 7th Fleet area of responsibility.

"Multi-Sail brings ships, submarines, and aircraft together to focus on core warfighting requirements," said Capt. Shan Byrne, commander of DESRON 15. "This exercise allows us to test our systems from end to end, challenge our Sailors, and validate our bilateral tactics, techniques, and procedures. Uniquely this year, our Japan Maritime Self-Defense Force allies will join us to practice intermediate and advanced warfighting skills."

"We did an excellent job getting the torpedo out of the tube and right on target," said Cmdr. Hans De For, commanding officer of Curtis Wilbur. "The crew rehearsed and prepared for this with our brand new A(V)15 SONAR system. Their hard work, determination and repetitious practice showed."

Throughout Multi-Sail 2015 some other major training evolutions include firing vertical launch anti-submarine (VLA) rockets, standard missile (SM) 2 missiles as well as testing the ship's close-in weapons system (CIWS) and Mark 45 5-inch gun during live-fire exercises. Additionally, the exercise will allow for interaction with a U.S. submarine and coordination with aircraft in order to continue to hone anti-surface and anti-submarine warfare skills.