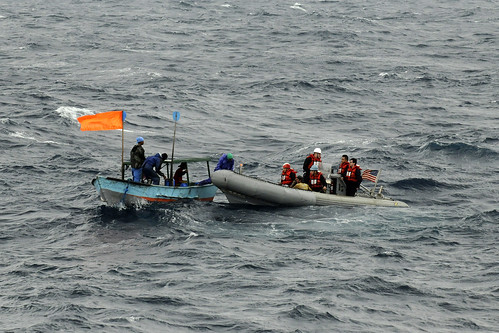 Five Filipino nationals had been fishing at sea when their boat’s motor stalled out, and the vessel was taken out by the current, leaving them adrift for three days with no food.

Blue Ridge watchstanders initially could only make out a small boat and a flag, but once the ship was within three nautical miles of the vessel, they noticed it didn’t appear to be moving and several men were inside.

“We thought it was strange to see something in the water, so we slowed down to get a better look,” said Ensign John Li, Blue Ridge officer of the deck during the response. “As we began looking for signs of distress, we noticed someone was waving a white t-shirt, while someone else was waving a flashlight.”

“I could see them jumping up and down trying to get our attention,” said Hospitalman Cassandra Spain, a bystander. “Their boat was being tossed around like a little toy due to the sea state.”

Responding to the men’s need of immediate assistance, Blue Ridge deployed a boarding team via rigid-hulled inflatable boat for a rescue, and safely brought the five men onboard the ship.

Once onboard, Blue Ridge’s medical crew provided basic first aid, showers and a change of clothes. The men were found to be suffering from hypothermia and malnourishment among other ailments.

“These are situations Navy medical professionals are trained for,” said Blue Ridge Medical Officer Lt. Cmdr. Omar Saeed. “Luckily, we were there at the right place and the right time to save a life.” 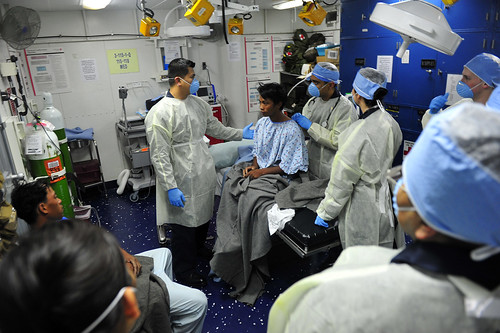