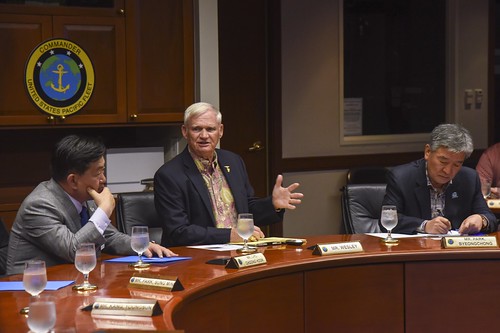 PEARL HARBOR - Ten mayors and local government officials from the Republic of Korea (ROK) got an inside look at U.S. Pacific Fleet (PACFLT) headquarters as part of an International Visitor Leadership Program April 20.

The program is designed to explore American values and traditions as the backbone of the U.S. political system, the relationship between local and state/federal, recent trends in the U.S.-ROK alliance, and the role of the justice system in adjudicating conflicts between federal and local jurisdictions.

"We are honored to visit this command. I never imagined I would visit the United States," said the Mayor of Goheung County Byeongchong Park. "As I listen to this discussion today, I believe I can return home and help you to keep war from happening again."

COMPACFLT participation in the program was to hold an open-forum discussion to cover topics such as the importance of the Indo-Asia-Pacific for trade and fishing, China, North Korea, the Rim of the Pacific exercise and ultimately, the rebalance to the Pacific.

Wesley went on to mention that PACFLT was pleased to have the opportunity to host international guests and show them what PACFLT does on a daily basis.

During the open-forum discussion, many of the participants showed their gratitude towards the U.S. and PACFLT.

Choong-Hoon Cho, mayor of Suncheon City Government talked about his appreciation of PACFLT doing its best so that the ROK will not see another war. He also said that he is grateful to be able to leave the meeting at PACFLT in comfort and peace.