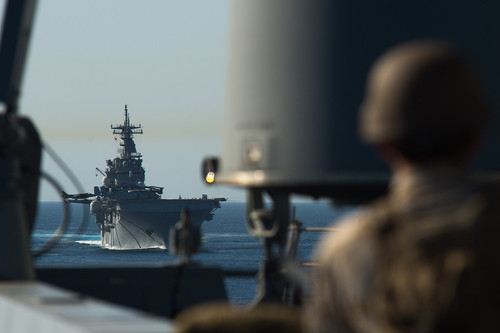 CERTEX is the final integrated-training event for the Essex ARG and 15th Marine Expeditionary Unit (MEU).

"The ESX ARG/MEU performed exceedingly well during CERTEX," said Capt. Clint Carroll, commander, Amphibious Squadron (CPR) 3. "We continue to train for every possible scenario, refining our procedure with each training mission. Coordinating, planning and executing the mission in an amphibious environment requires skill, attention to detail and the ability to adjust in a constantly evolving environment."

"The Marines and Sailors of the ESX ARG/15th MEU team have demonstrated that they are capable of projecting a full range of missions from humanitarian assistance to full spectrum combat operations with skill and professionalism," said Marine Col. Vance Cryer, commanding officer, 15th MEU. "We have been through an extensive work-up cycle culminating with an intense final certification exercise covering much of the southwestern U.S. and are ready to provide flexible, responsive options to our nation's leadership wherever a crisis or contingency arises in the littorals."

With an ever-increasing focus on joint operations, the scenario allowed the different services training in the event of a joint maritime operation.

"CERTEX was a great opportunity to learn and refine our methods during training, preparing us for potential real-world events," said Capt. Pete Mantz, USS Essex (LHD 2) commanding officer. "It allows our Navy and Marine Corps team to maintain a high state of readiness and really shows how important each Sailor or Marine is to the mission."

The ARG was also evaluated on many different scenarios testing their ability to operate in several mission-critical areas, including maritime boarding, combat flight operations and civilian evacuation drills.

The ARG/MEU team completed the first phase known as PHIBRON-MEU Integrated Training (PMINT) earlier in March, which gave the Blue/Green team their first opportunity to train together during staff-planning exercises and an amphibious-landing exercise. The second phase, Composite Training Unit Exercise (COMPTUEX), was completed in early April and allowed the Navy/Marine Corps team the opportunity to more fully integrate and cohesively conduct a variety of sea-based operations.

U.S. 3rd Fleet leads naval forces in the Eastern Pacific from the West Coast of North America to the international date line, and provides the realistic, relevant training necessary for an effective global Navy.