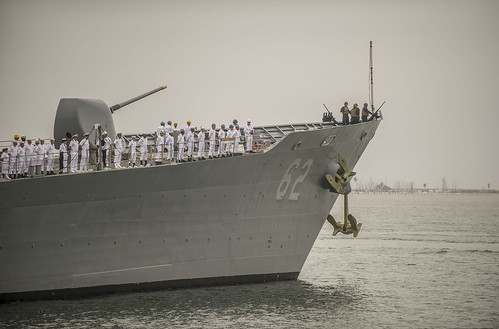 Chancellorsville will enhance presence in 7th Fleet as part of the U.S. Navy's long-range plan to send the most advanced and capable units to the Asia-Pacific region.

"It is Navy policy to forward deploy our most capable ships and there is no ship more capable than Chancellorsville," said Capt. Curt Renshaw, Chancellorsville's commanding officer. "That capability is not just a result of recent modernization, but is also a function of the readiness of the crew; and this crew has worked very hard to prepare for this day to ensure we are able to arrive immediately prepared for any mission."

Chancellorsville completed a combat systems update through the Navy's Cruiser Modernization program, making her among the most capable ships of her class. She is fitted with the latest Aegis Baseline 9 combat system, and will be the first to be forward deployed with that capability.

Future missions will include maritime security operations and cooperative training exercises with allies and partners in the Asia-Pacific region.

This ship, along with her counterparts in the Japan Self-Defense Forces, makes up part of the core capabilities needed by the alliance to meet our common strategic objectives.

U.S. 3rd Fleet leads naval forces in the Eastern Pacific from the West Coast of North America to the international date line.