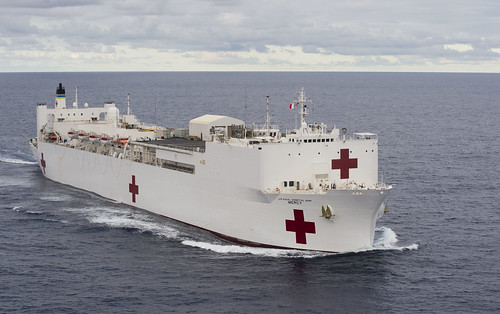 Mercy, from Naval Base San Diego, California, is currently serving as the primary platform for Pacific Partnership 2015. The secondary platform for the mission is the Military Sealift Command joint high speed vessel USNS Millinocket (JHSV 3).

Pacific Partnership began in response to one of the world's most catastrophic natural disasters, the December 2004 tsunami that devastated parts of Southeast Asia. Along with other nations, the United States responded to the tragedy, deploying U.S. Navy assets, including Mercy, which later returned to the region in 2006 for the first Pacific Partnership mission.

"We're operating in a region which is all too familiar with the devastation a natural disaster brings. Pacific Partnership helps us work together in peacetime, so when disaster strikes, we're ready to respond," said Engdahl.

The previous ten Pacific Partnership missions have provided medical care to approximately 270,000 patients and veterinary services to more than 38,000 animals.

Additionally, the missions provide critical infrastructure development to host nations through the completion of more than 180 engineering projects.