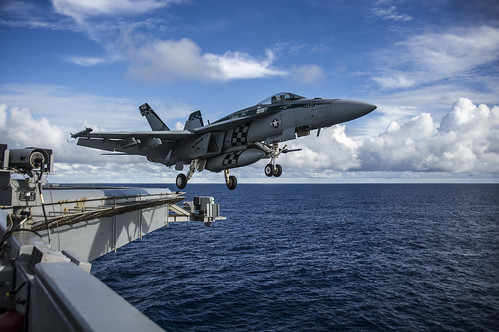 Koyama has approximately 5,300 flight hours in eight other military aircraft and two civilian aircraft combined. According to him, the significant part of this achievement is completing 4,000 hours in a carrier-based and jet-type aircraft wearing a G-suit and harness all while strapped down to an ejection seat.

Lightheartedly, Koyama was happy to add yet another patch to his jacket. However, he reflected and gave credit to those who were not in the spotlight.

"It represents just a symbol-like diary of what I have done in my career," said Koyama. "Twenty-seven years ago I signed up to join the Navy to fly and serve. This is just a representative icon to remind me of the line that connects me to that day. Professionally, it is a reminder of the great aircraft that the engineers, manufacturers and artisans created, the American people funded, and that other great Americans maintained."

During his 27-year service, Koyama said his most memorable flights are high ordnance expenditure combat flights during Operation Enduring Freedom in Afghanistan.

"First combat flights at the beginning of a campaign are not comparable to anything else, to include any training," said Koyama. "Despite intense planning, there is chaos and massive uncertainties. I think it was the time in my life when I was confronted with what I was made of."

As Koyama approached for an arrested landing to finish his momentous hour, Pollard approaches behind to perform his millenary arrested landing -- an accomplishment approximately only 450 naval aviators have achieved throughout U.S. Navy history, according to Pollard.

"This accomplishment is the result of many years deployed, supporting our nation's objectives throughout the world as a warfighter and ambassador," said Pollard. "It comes with years away from my family, and missing birthdays and holidays. This accomplishment is as much for my family as it is for me. I appreciate their sacrifice in supporting our nation and allowing me to do what I love."

"My first arrested landing was over before it started," said Pollard. "I remember trying to find the ball [a visual landing aid] on the side of the ship. Once I found it, the training took over. Fifteen seconds later I trapped and my face hit the dashboard. After 1,000 traps, you still have to go to school on every pass. You never stop learning. It takes focus and concentration to fly the ball all the way to touch down and get the target wire."

With his experience, Pollard recommends that junior pilots focus on the basics in order to build a solid foundation and reach their maximum potential.

Pollard also shared a quote from Theodore Roosevelt that he believes sums up a pilot's job in naval aviation and the Navy as a whole. "Far and away the best prize that life offers is the chance to work hard at work worth doing."

George Washington and its embarked air wing, CVW 5, are on patrol in the 7th Fleet area of responsibility supporting security and stability in the Indo-Asia-Pacific region. George Washington will conduct a hull swap with the Nimitz-class aircraft carrier USS Ronald Reagan (CVN 76) later this year after serving seven years as the U.S. Navy's only forward-deployed aircraft carrier in Yokosuka, Japan.