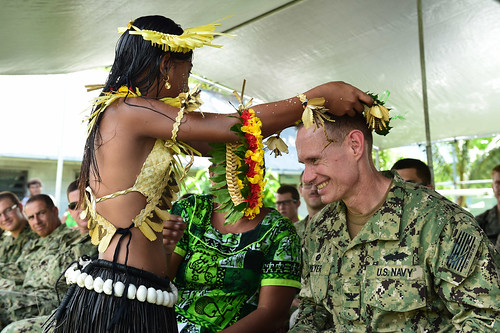 TARAWA, Kiribati - With three clicks of scissors, distinguished guests cut the ribbon on Temwanoku Primary School, June 17, officially marking the completion of renovations at the school during Pacific Partnership 2015.

“It was an amazing experience seeing the smiles on their faces and seeing them running around and checking out the school,” said Utilitiesman Constructionman Amber Woods, a Seabee assigned to Pacific Partnership 2015. “They were so excited. That feeling when the ribbon was cut, handing over all the hard work we did, it felt really good.”

“It seems like we arrived just yesterday, but it has been 15 days,” said Meyer. “In that very short amount of time we accomplished a lot. My hat is off to the combined efforts of the Seabees, Task Force personnel and members of the community that made this happen. It truly was a team effort!”

When speaking to the Seabees about the work accomplished, Meyer had this to say: “If there are any questions of why you worked so hard for the past 15 days I think it is evident as you look out in front of you, a school that supports almost 1,000 children and the smiles you have earned from the work you have done.”

According to Meyer, the renovations mean much more than simple repairs. “These renovated buildings represent the strong partnership that we built with the Kiribati people during the short two weeks together,” he said. “The intensity of the friendship and relationship is more important than the duration- it’s what helps a relationship endure well into the future.”