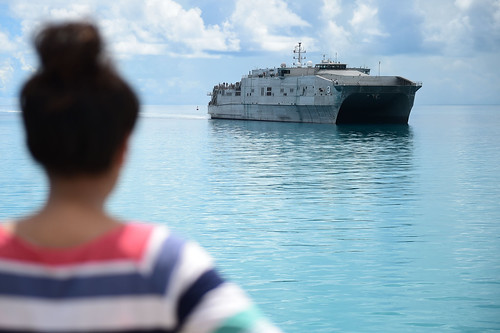 While only in the Republic of Kiribati for 15 days, the crew made a significant impact on the small island nation.

“A little over two weeks ago we began our mission in Kiribati, and today we stand proud of what we have achieved together,” said Commodore, Task Force Forager, Capt. James Meyer.

“The medical team helped better equip Kiribati medical professionals and the Kiribati healthcare system with the knowledge and information necessary to build their capacity to respond to a multitude of disasters,” said Meyer.

“Pacific Partnership isn’t just about the work accomplished, it is also about the relationships built, partnerships developed, and our increased ability to work together as global neighbors, especially during times of crisis,” said Meyer.

Meyer spoke of the warm welcome that Task Force Forager received in Kiribati. To the Kiribati people, he had these heartfelt words.

“Everything we have accomplished has truly been a team effort,” said Meyer. “The reception and welcome we received was overwhelming. Your kindness and hospitality is truly unforgettable and has touched everyone on our team. We have learned what generosity and hospitality really mean.”

Meyer continued, “As we depart Kiribati, I believe I speak for all of our team when I say that we are not just leaving behind some renovated schools, enhanced medical skills, and improved disaster response plans, but we are leaving behind a part of our hearts.”

Millinocket departed Kiribati June 18 and is currently en route to the Federated States of Micronesia.

Task Force Forager is led by an expeditionary command element from the Navy's 30th Naval Construction Regiment (30 NCR) from Port Hueneme, California. Millinocket is currently serving as the secondary platform for Pacific Partnership 2015. The primary platform for the mission is the Military Sealift Command hospital ship USNS Mercy (T-AH 19).