ESG 7 Trains to Counter Threats from Air and Surface 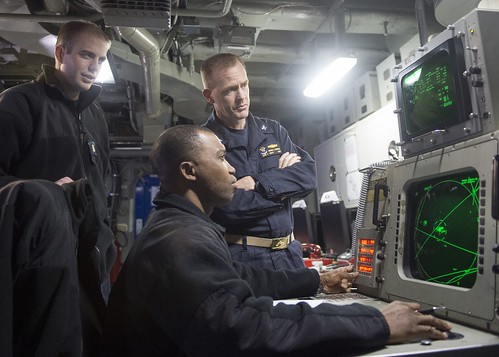 “The opportunity to train with an air-defense platform like the guided missile destroyer is invaluable,” Ensign Rob Prine, air defense command and liaison officer to Bonhomme Richard, said about the June 18 exercises. “The Preble’s Aegis weapons system and tactical data link capability increases the ESG’s over the horizon capability and brings highly experienced air defense watch standers to the team.”

Bonhomme Richard launched harriers to simulate adversary aircraft. By incorporating live aircraft into the tactical picture the strike group received the most realistic training possible. Experienced operations specialists from Preble were also sent out among the ships to provide experienced instruction.

“The ADEX was a valuable opportunity to knock the rust off,” said Capt. Kristy McCallum, commanding officer Green Bay. “And to ensure the experienced watch standers are training and integrating the next generation of warfighters.”

“The key to countering any threat, especially one as diverse and agile as FAC/FIAC, is early detection and communication and neither is easy in an area as diverse as 7th Fleet,” said McCallum, “As such, we train and certify to counter small boat and missile boat attacks, so the Sailors and their equipment have to be prepared and ready.”

Through the two exercises these ships learn to integrate and communicate in two critical mission areas.

“We have honed our ability to identify, track, engage and maneuver around small craft contacts and as a result strengthened our ability to defend the ESG,” said Lt. Matthew Huber, fire control officer aboard USS Preble.

The Bonhomme Richard Expeditionary Strike Group is on patrol in the U.S. 7th Fleet area of operations.