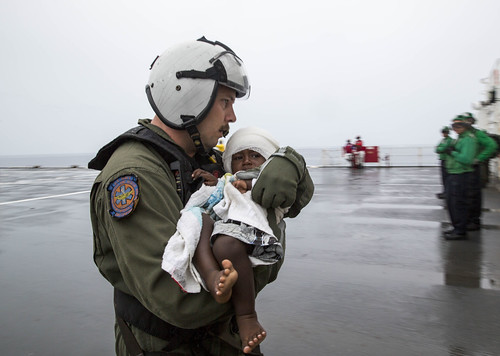 The Deputy Chief Secretary of the Autonomous Region of Bougainville, Papua New Guinea, contacted the U.S. Embassy in Port Moresby to request assistance transporting the civilians, who were survivors of a small vessel reported lost at sea June 27.

The mission commander of Pacific Partnership 2015, Capt. Chris Engdahl, directed his maritime operations center aboard Mercy to launch one of its helicopters from Helicopter Sea Combat Squadron 21 to pick up the injured and transport them to the ship for immediate care.

The injured had swam ashore after being lost at sea June 27. On that same day, Mercy received a request for search and rescue support from the Chief Secretary of the Autonomous Bougainville Government (ABG) through the U.S. Embassy in Port Moresby. The ABG reported a small boat missing at sea along with several passengers, one of whom was an infant. The boat had been in transit from Buka to Carteret Island.

In response, Mercy launched two helicopters, both with Navy search and rescue swimmers on board, to search the area, but they were unable to locate the boat or any survivors.

Of the passengers on board, six were able to swim to shore including a mother and her 18-month-old infant. The other remaining passengers remain unaccounted for, but a search operation continues led by the Papua New Guinea National Maritime Safety Authority.

Mercy is currently in Papua New Guinea for its second mission port of Pacific Partnership 2015. Pacific Partnership is in its tenth iteration and is the largest annual multilateral humanitarian assistance and disaster relief preparedness mission conducted in the Indo-Asia-Pacific region. While training for crisis conditions, Pacific Partnership missions to date have provided real world medical care to approximately 270,000 patients and veterinary services to more than 38,000 animals. Critical infrastructure development has been supported in host nations during more than 180 engineering projects. 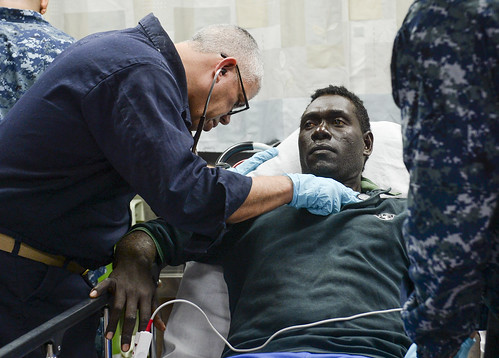