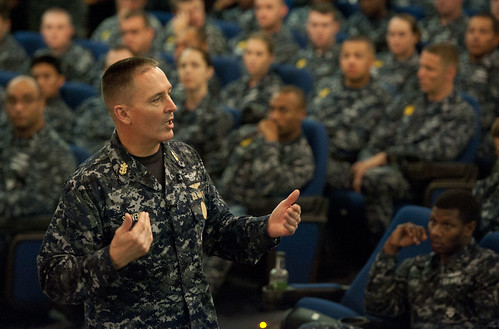 The visit is part of MCPON’s Fleet engagement. Stevens held all hands calls on board Joint Base Pearl Harbor-Hickam, where he split Sailors into two groups. One call was for the junior enlisted E-5 and below, and the second for the senior enlisted E-6 and above. The focus of the all hands calls was to identify issues impacting today's Navy.

“Coming here, talking with you and listening to your thoughts, concerns, and recommendations are very important to me,” said Stevens. “It allows me to gauge the morale of our force, while addressing any concerns you may have.”

Stevens started out each session with an interactive exercise to gauge how Sailors viewed the overall fleet’s moral. The audience closed their eyes so as to not be influenced by the people around them and voted on whether they thought the Navy’s moral was poor, good, good high, excellent or outstanding. The feedback from the junior enlisted and their senior enlisted leadership was similar, with more variation from the good to very good categories.

After the exercise, Stevens opened the floor up for questions from the audience. Sailors brought up various issues including exchange and commissary rumors, fitness standards and financial concerns. One Sailor expressed his concern about the proposed cut to Base Allowance for Housing to dual military households, an issue that affects many Sailors and their families.

“I have been involved in this discussion for quite some time," said Stevens. “Tomorrow, I’ll be talking with staff members from the senate and I will continue to convey exactly what your concerns are.” “Senior leadership is committed to help get this right for our Sailors and their families.”

Stevens also talked about the importance of diversity when a Sailor brought up women’s integration into the submarine force, stating that he was glad for the change and when women are excluded from the field, it is a disservice to the U.S. Navy.

"We are the greatest Navy in the world, no doubt about it, and what I believe makes our Navy so great is our diversity, just like our nation,” said Stevens.

According to Cryptologic Technician (Technical) 3rd class Alyssa Kauffman, the MCPON was good at opening the Sailors up for conversation and made them feel comfortable.

“I feel like the all-hands call went well,” said Kauffman. “People had a lot of issues to address and they all had meaning, so I felt like it was a productive conversation.”

“We’re incorporating the first classes as future leaders, so it’s important for them to see what we do,” said Cherland. “I’m glad the MCPON is here in Hawaii and glad we get to talk to him and get some of his points.”

While in Hawaii, Stevens also met with Adm. Scott Swift, commander of the U.S. Pacific Fleet, to discuss matters that affect the Navy’s Pacific region.

Stevens and his wife Theresa, Ombudsman At Large, also met with approximately 60 spouses from the local ombudsman team to discuss issues ranging from child development centers to spouse support programs. 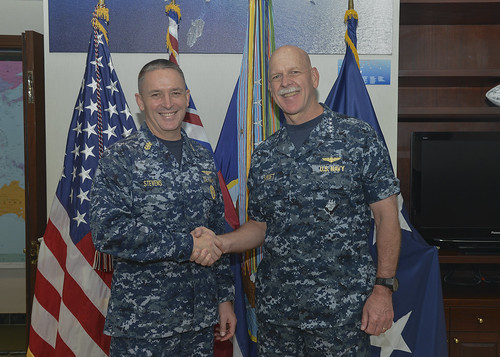