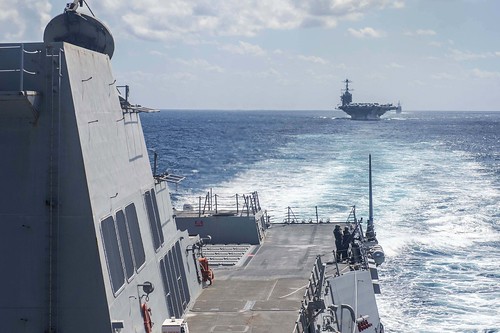 "Talisman Sabre provides a realistic and challenging environment that improves both nations' ability to work bilaterally," said Rear Adm. John Alexander, commander of GWCSG. "It also helps to prepare U.S. and Australian service members to work together to provide security in the region and around the world."

The GWCSG will join nearly 30,000 U.S. and Australian personnel, 21 ships, more than 200 aircraft, and three submarines, in this sixth iteration of the exercise. The strike group will focus on joint training alongside the Royal Australian Navy and Air Force by conducting sea and air training throughout multiple areas in and around Australia.

"This exercise illustrates the closeness of the Australia-U.S. alliance and the strength of our military-to-military relationship." said Alexander. "It provides an invaluable opportunity to conduct operations in a joint environment that will increase all participants' ability to plan, coordinate and execute complex operations."

Previous story
Seabees Renovate Schools in the Federated States of Micronesia
Next story
U.S., Australian Forces ‘On Board’ for Talisman Sabre