USS Gary to Decommission After More Than 30 Years of Service 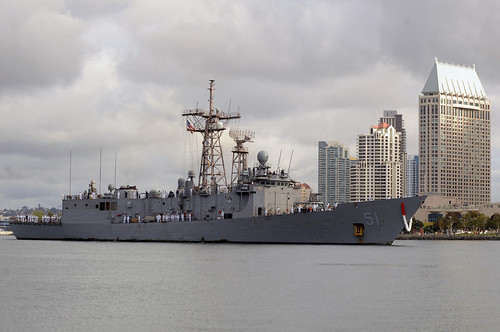 SAN DIEGO - The guided-missile frigate USS Gary (FFG 51) is scheduled to be decommissioned after more than 30 years of service in a ceremony on Naval Base San Diego, July 23.

Commissioned on Nov. 17, 1984, Gary was named after Cmdr. Donald Arthur Gary, who was awarded the Medal of Honor for his actions to help save the aircraft carrier USS Franklin (CV 13) after it was heavily damaged by aircraft from the Imperial Japanese Navy on March 19, 1945.

World War II veteran William R. Albrecht, a survivor of the attack on Franklin in 1945 and a recipient of the Bronze Star, is scheduled to deliver the principal address.

The ship returned from its final deployment in April, following operations in the U.S. Naval Forces Southern Command/U.S. 4th Fleet area of responsibility. Gary was part of the counter-transnational organized crime (C-TOC) mission Operation Martillo, a joint, combined operation involving the U.S. and 14 European and Western Hemisphere partner nations which targets illicit trafficking routes in the waters off Central America.

While participating in Operation Martillo, Gary intercepted approximately 13,921 kilograms of cocaine and disrupted numerous other illegal drug shipments. The ship and crew also participated in more than 70 small boat operations and coordinated with several U.S. Maritime Patrol Aircraft (MPA) and surface units to include U.S. Navy and Canadian warships, U.S. Coast Guard cutters, and Panamanian, Colombian, Costa Rican, and Ecuadorian Coast Guard vessels in an effort to share resources and strengthen operations while reinforcing commitment to the region.