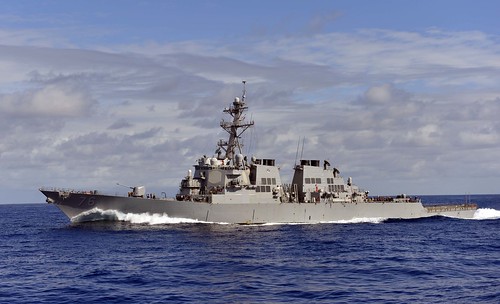 Higgins, which departed its homeport of San Diego, July 6, is conducting an independent deployment to the Western Pacific Ocean, Indian Ocean and Middle East and is scheduled to perform theater security cooperation engagements and maritime security operations.

"This deployment is the culmination of a rigorous year-long training cycle." said Cmdr. Allen Johnson, Higgins' commanding officer. "Our crew is extremely capable and ready to perform all missions assigned."

Higgins, is a multi-mission ship with anti-air warfare, anti-submarine warfare and anti-surface warfare, surface combatant capabilities; designed to operate independently or with an associated strike group.

The U.S. 7th Fleet AOR encompasses more than 48 million square miles (more than 124 million square kilometers) -- from the Kuril Islands in the north to the Antarctic in the south, and from the International Date Line to the 68th meridian east, which runs down from the India-Pakistan border. The area includes 36 maritime countries and the world's five largest foreign armed forces -- People's Republic of China, Russia, India, North Korea and Republic of Korea. Five of the seven U.S. Mutual Defense Treaties are with countries in the area -- Republic of the Philippines, Australia and New Zealand, Republic of Korea, Japan, and Thailand.