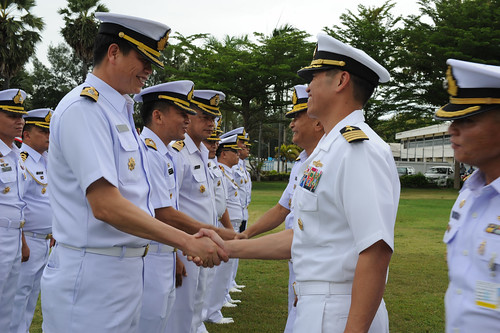 SATTAHIP NAVAL BASE, Thailand - The 21st annual Cooperation Afloat Readiness and Training (CARAT) exercise between the U.S. Navy, U.S. Marine Corps, and the Royal Thai Armed Forces came to a close Sept. 2 on Sattahip Naval Base.

"Each year that we participate in CARAT with the Royal Thai Armed Forces, our relationship grows stronger," said Capt. H.B. Le, commodore, Destroyer Squadron 7. "Our armed forces share the same commitment to maintaining security and stability in the region, and continuing to execute military exercises during realistic training scenarios ensures that we will be ready to operate together during times of crisis."

The capstone of the sea-phase portion of CARAT 2015 was the successful first-of-class firing of an Evolved Sea Sparrow Missile (ESSM) from the HTMS Naresuan, achieving a direct hit on the BQM-74E drone missile launched from the amphibious dock landing ship USS Germantown (LSD 42).

While military engagements are a major part of every CARAT, Capt. Le stressed the importance of community engagements and the impact they have on the host nation.

"Community outreach activities continue to be a significant part of all CARAT exercises, and I am particularly proud of what our team was able to accomplish here in Thailand," said Le. "Our commitment to Thailand extends beyond our military relationship, and we were able to show that by engaging in several community service (COMSERV) projects throughout CARAT 2015."

In total, more than 400 Sailors and Marines participated in four COMSERV projects, where they spent several hours at schools and community centers throughout the area, playing games and providing entertainment to more than 500 children.

In addition to COMRELs, the shore phase of CARAT Thailand included eight performances from the U.S. 7th Fleet rock band "Orient Express." The band played a series of public concerts throughout the region in front of more than 10,000 people. Chief Musician Jose Acosta, who plays saxophone with the band, reflected on their performances.

"It was an honor for us to be a part of CARAT Thailand 2015," he said. "Cultural exchanges are an important part of enhancing partnerships and building friendships, and through our shared love of music, we were able to do that here in Thailand."

Commander, Task Force 73 and Destroyer Squadron 7 staff conduct advanced planning, organize resources and directly support the execution of maritime exercises such as the bilateral CARAT series, the Naval Engagement Activity with Vietnam, and the multilateral Southeast Asia Cooperation and Training with Brunei, Indonesia, Malaysia, the Philippines, Singapore, and Thailand.