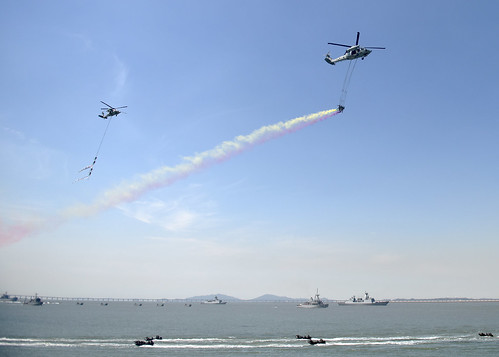 "The enduring partnership the U.S. and ROK share was forged in battles such as Incheon," said Rear Adm. Bill Byrne, commander of U.S. Naval Forces, Korea. "It was a daring plan by a great leader and it succeeded due to the courage displayed by the UN forces dedicated to the cause of a peaceful Korean peninsula. The brave Korean War veterans fought for that dream and we are here to ensure it remains."

U.S. Marine Corps Col. John J. Carrol, the deputy commander of U.S. Marine Forces Korea, echoed Byrne's sentiments when he noted the landing was a key event that brought forward the opportunity for the ROK to grow under freedom and prosperity.

“It was a significant day in history," said Carrol. "Today showed how both U.S. and ROK marines contributed to that success then and today."

The ceremony began with a tribute to MacArthur by ROK veterans as well as government and civil leaders. After the tribute to the former U.N. supreme commander, the guests were treated to a reenactment that included mine sweeping demonstrations and an allied military power demonstration featuring amphibious assault vehicles, helicopters, airplanes and a landing force made of U.S. and ROK Marines.

“The reenactment was great because it showed how complex the landing was,” said ROK native and U.S. Navy Lt. Sohnhwa Lee, currently assigned to U.S. Naval Forces, Korea. “This demonstration made it a bit surreal and personal to me because if the coalition forces did not succeed, there would be no Republic of Korea.”

Following the 90 minute reenactment and ceremony the Canadian Defense Attaché, Col. Jeff Drummond, said it was heartwarming to see the recognition of all U.N. Sending States who contributed to the allied effort during the Korean War.

“As the world has become smaller it is more important today than it was then to have a vested interest in the peace and security and forge the bond of trust with our allies so we are all well prepared.”

The U.S. and ROK navies have an enduring partnership that was strengthened by the mutual sacrifice to bring security and stability to the Korean peninsula. The two nations work together throughout the year in annual joint exercises, various community relations projects and continual participation in official ceremonies. 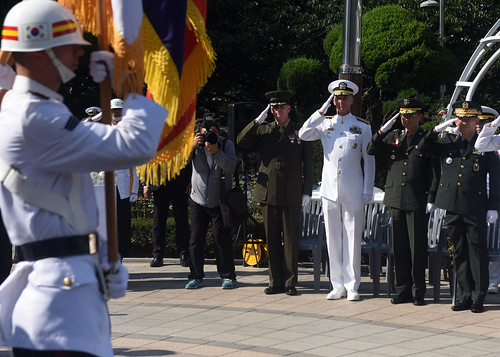 Rear Adm. William Byrne, commander of U.S. Naval Forces Korea, and other U.S. and Republic of Korea military leaders render a salute at the Gen. Douglas MacArthur memorial statue during a ceremony Sept. 15 paying tribute to the sacrifices service members made in the Korean War. (U.S. Navy/MC1 Abraham Essenmacher)