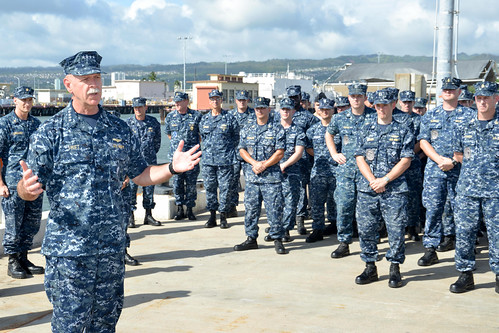 Adm. Scott Swift, commander of U.S. Pacific Fleet, presented the trophy with congratulations on behalf of the Chief of Naval Operations to the crew during a pier side ceremony at Joint Base Pearl Harbor-Hickam, Sept. 21.

"Operations are about achieving and maintaining readiness; we take what is produced and we consume it, in our operations and we work to achieve balance," said Swift. "Taking the resources available and matching it to the readiness requirement, is what you knew you needed to do to make Columbia as fit as possibly be within the constrained resources."

"You have taken that readiness challenge and not only surpassed your peers in how much you have advanced your readiness," said Swift. "You have advanced it all the way to the top in recognition of the fact you were awarded the Battle 'E'."

Swift said it was a very unique distinction for the crew to win Commander, Submarine Squadron Seven's Battle Efficiency Award and the Pacific Fleet Arleigh Burke Trophy during the same time period.

The Arleigh Burke Fleet Trophy, is presented annually to the ship or aviation squadron in both the Atlantic and Pacific Fleets that has achieved the greatest improvement during the previous year based on the Battle Efficiency (Battle "E") Competition. The competition is conducted annually to strengthen individual command performance, improve overall force readiness, and recognize outstanding performance.

Cmdr. David Edgerton, USS Columbia's commanding officer, was very proud of the enthusiasm, hard work and dedication of the crew.

"I have never seen a crew with more enthusiasm. Most of all, I am impressed by their humility," Edgerton said. "Despite receiving awards such as the Arleigh Burke Trophy and the Battle 'E' from Submarine Squadron Seven, the crew continues to maintain a steady strain on keeping the high standards that are essential to sustained superior performance."