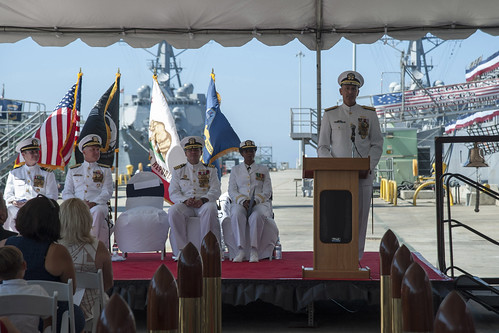 SAN DIEGO - The guided-missile cruiser USS Cowpens (CG 63) was inducted as the first ship to undergo a modernization effort that will significantly upgrade its capabilities in multiple mission areas, Sept. 25, at Naval Base San Diego.

As part of the ceremony, Cowpens was transferred from the authority of Rowden to Vice Adm. William Hilarides, commander, Naval Sea Systems Command (NAVSEA).

"Today's ceremony marks the first step in extending the lives of our cruisers, and I'm excited to be a part of it," said Hilarides. "That excitement will only be matched when, after an exciting and challenging modernization, she returns to duty as part of our active fleet."

"When she returns to the fleet, she will be fully modernized and capable of meeting and defeating any threat," said Rowden. "This is smart work."

Upon completion of the modernization, Cowpens will have a 29-year-old hull but the most modern and capable combat system available, and an extended life from 35 to 44 years.

"Admiral Hilarides will take custody of a ship that has been a powerhouse in the world's most powerful Navy and make her, over time, something even greater," said Rowden.

That sentiment was also shared by Hilarides.

"Cowpens will be a game changer, and I look forward to the day when this ship leaves my care and sails over the horizon; that will be a great day for the Navy and the nation," he said.

The guided-missile cruiser USS Gettysburg (CG 64) is also scheduled to be inducted and undergo the same phased modernization as Cowpens Sept. 30.

Sciretta graduated from the Pennsylvania State University with a degree in administration of justice, and was commissioned in 1992 through the Navy Reserve Officer Training Corp. He is scheduled to take command of the USS Lake Erie (CG 70) later next month.

Sollfrank is a native of Cortland, New York, and graduated from Hawaii Pacific University in 2001, receiving a degree in diplomacy and military studies. He previously served as the commanding officer of Mine Countermeasure (MCM) Crew Dominant.