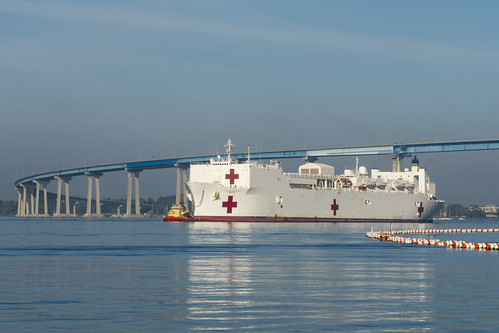 More than 600 Sailors, Marines and civilian mariners returned to their families and friends after participating in PP15, where they provided medicine, dentistry, veterinary, public health services, engineering and disaster response training, education and direct care in Fiji, Papua New Guinea, the Philippines and Vietnam.

“I am proud to have been in command of several ordnance, fuel and supply ships in the defense of freedom, but I can find no greater honor then to have commanded USNS Mercy during Pacific Partnership, bringing a cargo of friendship, aid and hope to those in need,” said Thomas Giudice, the merchant marine captain of Mercy.

“As the 10th Pacific Partnership mission draws to a close and our talented group of Sailors, Marines, Soldiers, Airmen, Coast Guard men, non-governmental organization volunteers and international partners return to their bases, homes and families we can all take a moment to reflect on the regional ties we have renewed, the improvements in disaster response preparedness we have made, and the deepening of commitments our nations and organizations have demonstrated, not only for the people of Kiribati, Solomon Islands, Federated States of Micronesia, Fiji, Papua New Guinea, Philippines, and Vietnam, but to the Indo-Asia-Pacific Region as a whole,“ said Capt. Christopher Engdahl, the Pacific Partnership 2015 mission commander.

“We learned a tremendous amount from our partner nations in subject matter expert exchanges,” said Capt. Melanie Merrick, the commanding officer of the medical treatment facility USNS Mercy. “Some of the SMEEs were hands on, actually performing skill sets and others were more give-and-take lectures. It was fascinating to get together with their emergency response people, city leaders, county folks and really discuss what they would do if there were a massive disaster in their area.”

After visiting four countries and seven mission ports, PP15 personnel said they were eager to return to their friends and family after playing a vital role in improving disaster response preparedness in the Indo-Asia-Pacific region. Those ashore were happy they are home too, and proud of the work they have done.

"To see what these men and women and this ship have accomplished over these past four and a half month is really amazing," said Vice Adm. Nora Tyson, U.S. Commander 3rd Fleet. "Everyone from the medical personnel to the MSC crew to the mission staff worked together, focused their efforts and successfully completed the largest multinational HA/DR preparedness mission in the Pacific. We thank them for their hard work and dedication, and welcome them home today."

Pacific Partnership is in its tenth iteration and is the largest annual multilateral humanitarian assistance and disaster relief preparedness mission conducted in the Indo-Asia-Pacific region. Pacific Partnership began in response to one of the world’s most catastrophic natural disasters, the December 2004 tsunami that devastated parts of Southeast Asia. Along with other nations, the United States responded to the tragedy, deploying U.S. Navy assets, including the Mercy, which later returned to the region in 2006 for the first Pacific Partnership mission.