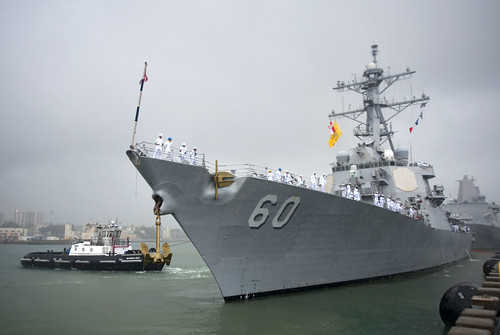 PEARL HARBOR - The guided-missile destroyer USS Paul Hamilton (DDG 60) is scheduled to return Sept. 29 from an independent deployment to the Arabian Gulf and Western Pacific Ocean.

Deployed since February, the ship and crew of more than 300 Sailors steamed a total of 40,538 nautical miles across 3rd, 5th and 7th Fleets and conducted maritime security operations and direct support to both Operation Enduring Freedom and Operation Inherent Resolve.

"I can't tell you how proud I am of the way Paul Hamilton and her great crew performed through an extremely high-operational tempo seven-month independent ballistic-missile defense deployment," said Cmdr. John S. Barsano, commanding officer. "We worked with two different strike groups, two carriers, conducted three partnership theater security cooperation exercises with the Saudi Royal Navy and United Arab Emirates Navy, and through it all met and exceeded all expectations in a dynamic environment."

Paul Hamilton conducted several multi-national exercises in the 5th Fleet area of operations in conjunction with the ships of both the Carl Vinson and Theodore Roosevelt Carrier Strike Groups; strengthening partnerships, reinforcing regional security, and promoting successful interoperability for the area.

"What an adventure of a lifetime and the special memories to go with it," said Barsano. "I am most proud of how the crew conducted themselves as ambassadors of Paul Hamilton, the Navy, and our nation on liberty during ten foreign port visits."

Paul Hamilton is a multi-mission ship designed to operate independently or with an associated strike group. The ship is assigned to Destroyer Squadron 21 and is homeported in Hawaii within the U.S. 3rd Fleet area of operations.