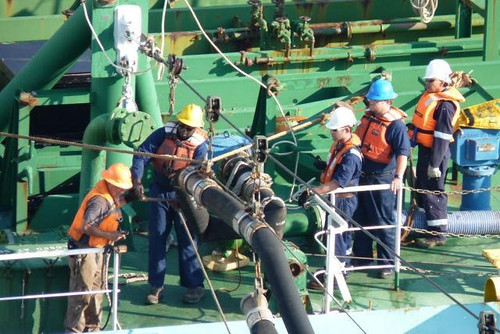 This four-day training event was just the second time in the last 15 years that a U.S. Navy tanker conducted fueling operations at sea with a commercial vessel.

"Typically MSC oilers like Tippecanoe are required to dock pier-side at one of the Navy's Defense Fuel Support Points," said Capt. Philippe Grandjean, Assistant Chief of Staff for Logistics (N4) for Commander, Logistics Group Western Pacific (COMLOG WESTPAC). "The capability exercised during this training evolution pushes the Navy's ability to refuel at sea via commercial tankers and furthers the vision of a distributed, agile, logistics concept."

Distributed logistics provide flexibility for the U.S. 7th Fleet, which operates in the Indo-Asia-Pacific region, an area of 48 million square miles.

"Our replenishment oiler crews must be proficient in receiving fuel from commercial tankers in case, for some reason, a natural disaster for example, a vital asset cannot make it into port to refuel," explained Cmdr. Michael Wilson, deputy assistant chief of staff for logistics for COMLOG WESTPAC. "These operations provide MSC with flexibility in providing operational support to the 7th Fleet in any situation."

The refueling between Tippecanoe and Maersk Peary marks an important step in increasing proficiency with at-sea fuel consolidation operation between tankers.

"We are leading the way here in 7th Fleet," said Grandjean. "We are committed to doing this particular training quarterly. The end goal for Navy and MSC is to see this training taking place throughout the Fleet on as many tankers as possible."

Maersk Peary is under a long-term charter to MSC and is one of four MSC charters that have been specially outfitted to conduct consolidated cargo capability operations with fleet replenishment oilers. 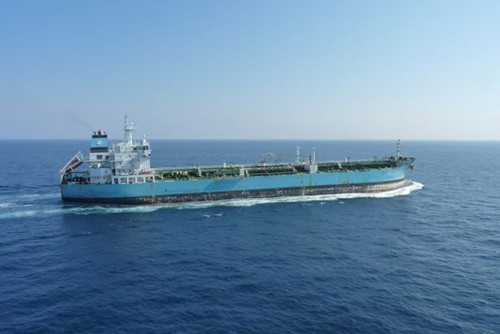 Maersk Peary operates in international waters off the coast of Sasebo, Japan, during a fueling evolution with USNS Tippecanoe. (U.S. Navy photo)