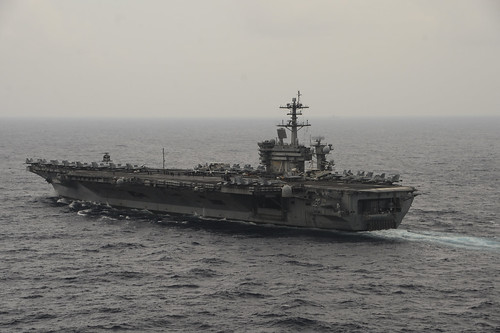 "Having two carrier strike groups in the region working simultaneously with our allies and partners is just another example of our commitment to building capacity, keeping the sea lanes open and maintaining peace in the region," said Vice Adm. Joseph Aucoin, commander, Seventh Fleet. "We are pleased with the opportunity for the crew of the Theodore Roosevelt to have been able to work alongside our Indian and JMSDF partners on its way through 7th Fleet."

“The U.S. Navy maintains a presence in the Indo-Asia-Pacific region to help preserve peace and security and further our partnerships with friends and allies,” said Rear Adm. John Alexander, commander, Ronald Reagan CSG. “Our forward presence contributes to freedom of navigation and lawful use of the sea, as well as furthers operational training and enables an exchange of culture, skills, and tactical knowledge.”

During the Theodore Roosevelt visit to Singapore, Sailors participated in multiple community relations events, took in the cultural sites and sounds of Singapore in a welcome break from operations at sea.

Prior to the Singapore port visit, Theodore Roosevelt and Normandy participated in the trilateral exercise Malabar with the Indian and Japanese navies. The annual high-end warfighting exercise, which began in 1992, featured maritime patrol and reconnaissance operations, surface and anti-submarine warfare, air defense exercises (ADEX), and visit, board, search and seizure (VBSS) operations. Malabar is a continuing series of complex, war fighting exercises conducted to advance multi-national maritime relationships and mutual security. It features complex exercises both ashore and at sea.

The 7th Fleet’s area of responsibility encompasses more than 48 million square miles (more than 124 million square kilometers) - from the Kuril Islands in the north to the Antarctic in the south, and from the International Date Line to the 68th meridian east, which runs down from the India-Pakistan border. The area includes 36 maritime countries and the world’s five largest foreign armed forces - People’s Republic of China, Russia, India, North Korea and Republic of Korea. Five of the seven U.S. Mutual Defense Treaties are with countries in the area - Republic of the Philippines, Australia and New Zealand, Republic of Korea, Japan, and Thailand. 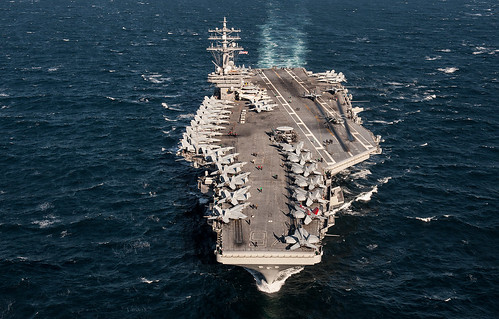