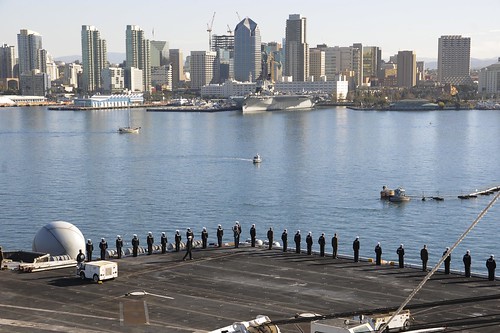 “It has been a long and unique deployment as the Theodore Roosevelt Carrier Strike Group has deployed around the world,” said Rear Adm. Roy Kelley, Commander, Theodore Roosevelt Carrier Strike Group. “The team has flawlessly executed combat missions on ISIL targets in Iraq and Syria, and provided maritime security from the Arabian Sea, to the Indian Ocean, the South China Sea and on into the Pacific. With pride and perfection they have answered the call of their nation… operating where it matters, when it matters.”

“The professionalism, dedication and sacrifice of the TR team is unmatched,” said Capt. Craig Clapperton, Theodore Roosevelt’s commanding officer. “Each and every member of the Rough Rider and Tarbox team worked hard to complete the mission safely and effectively, even battling through the unforgiving heat of the Arabian Gulf. I could not be more proud of this team for a job well done.”

“This has been a long and arduous deployment, operating in the extreme heat of the Arabian Gulf, and our Sailors and Marines have performed,” said Capt. Benjamin Hewlett, commander of Carrier Air Wing 1. “The deck crew launched over 1,800 combat sorties into Iraq and Syria and the aircrew dropped over one million pounds of precision guided ordnance on Islamic State targets. We can all be justifiably proud of the impact that this air wing has had in the fight to destroy ISIL. It takes every Sailor and Marine on this ship and in the air wing to launch these aircraft into harm’s way and the professionalism and precision in which they performed was truly eye watering. I am proud to have been the CAG for such an amazing team of professionals and we can all return home with the pride of a job well done.”

During the course of Theodore Roosevelt’s deployment, CVW 1 successfully executed 1,812 combat sorties encompassing 10,618 combat flight hours over Iraq and Syria as part of Operation Inherent Resolve (OIR). OIR is a comprehensive strategy to degrade and defeat the Islamic State of Iraq and the Levant, or ISIL.

The “Dragonslayers” of HS-11 are returning from the last active duty operational deployment of the HH-60H and the SH-60F Seahawk. The squadron will transition to helicopter sea combat squadron HSC-11 and will fly the MH-60S Seahawk. During their deployment, the “Dragonslayers” flew more 31,000 hours in support of flight operations and defense of the carrier. To note, they conducted 13 medical evacuations, seven strait transits and conducted three search and rescue missions including rescuing two pilots after a plane crash and a Sailor that had fallen overboard.

Normandy continues her transit through the 3rd and 4th Fleet AOO and will return to her homeport of Naval Station Norfolk in December 2015.

Theodore Roosevelt, named in honor of the 26th U.S. President, was commissioned Oct. 25, 1984, as the fourth Nimitz-class aircraft carrier.