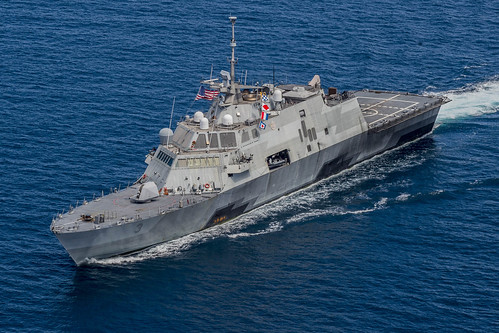 CHANGI NAVAL BASE, Singapore - USS Fort Worth (LCS 3) surpassed the one-year mark on her scheduled 16-month rotational deployment to Singapore in support of the Indo-Asia-Pacific rebalance Nov. 17.

As part of an initiative to deploy up to four LCS to the region on a rotational basis, Fort Worth deployed from San Diego on Nov. 17, 2014 and operates out of Singapore as a maintenance and logistics hub from which the ship conducts patrols and trains with regional navies during exercises like Cooperation Afloat Readiness and Training (CARAT).

"Fort Worth has demonstrated tremendous operational flexibility throughout her deployment," said Capt. H. B. Le, commodore, Destroyer Squadron 7. "She has operated in waters from Northeast Asia to the Indian Ocean, and her participation in multiple exercises with partner navies in South and Southeast Asia has greatly increased interoperability in the region."

Since arriving in Singapore Dec. 29, Fort Worth has participated in search efforts for AirAsia flight QZ8501; Naval Engagement Activity (NEA) Vietnam; exercise foal Eagle with the Republic of Korea Navy; CARAT exercises with Republic of the Philippines, Singapore, Indonesia, Malaysia, and Bangladesh; exercise Malabar with the Indian Navy and Japanese Maritime Self Defense Force (JMSDF); and conducted a routine patrol in the South China Sea near the Spratly Islands.

Fort Worth has operated the entirety of her deployment with a surface warfare mission package, consisting of an MH-60R helicopter, MQ-8B Fire Scout unmanned aircraft system, and two 11-meter rigid-hull inflatable boats (RHIBs) with two six-man boarding teams. This deployment marks the first time Fire Scout is operating in 7th Fleet onboard Fort Worth, expanding the ship’s aviation capabilities and providing a dedicated asset for maritime domain awareness.

Fast, agile and mission-focused, littoral combat ships are designed to operate in near-shore environments and employ modular mission packages that can be configured for surface warfare, mine countermeasures or anti-submarine warfare.