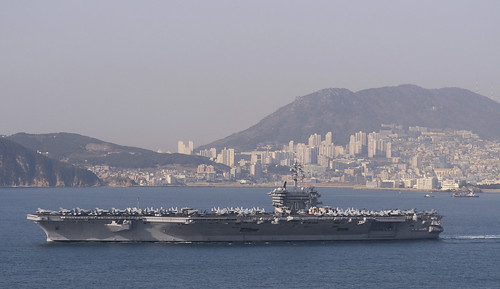 BUSAN, Republic of Korea - The streets are still damp with rain left the night before as apartment lights begin to pierce the night sky, dawn is still hours away but the city of Busan is waking up.

The routine is business as usual for the 3.4 million people who call the port city home, but for Sailors of Commander, U.S. Naval Forces Korea (CNFK), this routine is not usual at all.

For the first time since its creation in 1957, CNFK’s headquarters is no longer on a U.S. base. After the shift to Busan in July of 2015, it became the only U.S. headquarters in Korea located on a Republic of Korea (ROK) base.

“Moving is always a challenge especially when our families are affected, but this move was the right decision,” Rear Adm. Bill Byrne, the commander of CNFK, said. “By being in Busan we are literally right across the street from our ROK Navy partners, which facilitates closer cooperation and collaboration and in turn increases the readiness of both navies.”

The move has also encouraged closer collaboration among the CNFK family members as those accustomed to the familiar facilities of Yongsan Army Garrison in Seoul become acclimated to living in the local Busan community.

“There are challenges to living in a new city, especially one where the Navy is not established,” Senior Chief Operations Specialist Rodney Ham said. “The cost of living is higher and we pay more for food because there is not a commissary nearby but Busan has a good quality of life, the transportation is good, and we like the schools so we enjoy being here.”

Ham and his wife, Lawanda, are one of a dozen U.S. Navy parents benefiting from the available school systems in Busan. Since there are no sponsored Department of Defense schools, U.S. military families have the option to send their school age children to either the Busan Foreign School (BFS) or Busan International Foreign School (BIFS).

“Our kids go to BFS. I am happy with the school and I know other parents are just as happy with BIFS,” Lawanda Ham said. “Both schools are a great environment for kids to be themselves and just get to know one another; I just wish I could take this school with us back to the states.”

Something else Lawanda wishes she could take back with her is the scenery and ease of travelling.

“It is very easy to get around,” said Lawanda. “Busan is a tourist city and it is easy to get immersed in a lot of the events and activities that tourists travel many miles to see. It's like being on vacation.”

For the Hams, who transitioned from Seoul, Busan is new but for several families Busan has always been their home in Korea.

“I love being here,” Lt. j.g. Aura Gaines said. “Being here is about becoming closer with our ROK counterparts but it is also about living and breathing the Korean culture and getting to the know the country on a deeper level.”

“We lived in Busan a year before the relocation [in 2015], and thought life was easy, fun, and exciting. Every day was a new adventure of learning a new language and experiencing a new culture.”

More than 50 U.S. Navy Sailors, civilians and family members call Busan home and after more than five years of planning and a year of construction, CNFK’s official headquarters building is expected to be complete in early 2016.