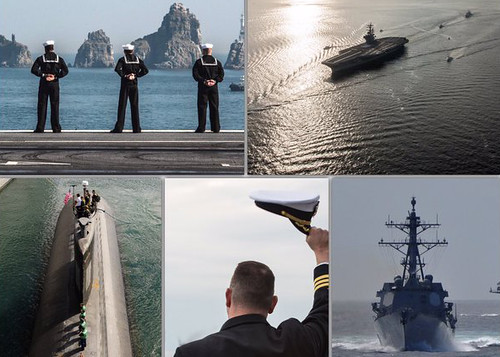 YOKOSUKA, Japan - As the ball dropped in Times Square to usher in 2015, more than 300 Sailors aboard USS Sampson (DDG 102) were busy conducting search and recovery operations in the Java Sea, following the crash of AirAsia Flight 8501 Dec. 28, 2014.

Days later USS Fort Worth (LCS 3) also joined the multi-national recovery effort, along with vessels and aircraft from Indonesia, Singapore, Malaysia, Australia, the Republic of Korea, Japan, China and Russia.

While tragic, the incident emphasized the value of maritime partnerships in the Indo-Asia Pacific.

The largest exercise was Talisman Sabre, where roughly 33,000 U.S. and Australian personnel participated in the biennial military training exercise July 4-19.

Featuring 21 ships, including U.S. Navy aircraft carrier USS George Washington (CVN 73) and more than 200 aircraft and three submarines, the sixth iteration of the exercise focused on joint training of a combined task force of U.S. and Australian forces.

On Sept. 7, Vice Adm. Joseph P. Aucoin, a graduate of North Carolina State University, became the 50th commander of U.S. 7th Fleet, following a tour as Deputy Chief of Naval Operations for Warfare Systems. "I can't describe how honored I am to be back in 7th Fleet, this is a storied command," Aucoin said at the ceremony. "7th Fleet is the jewel of our Navy."

He replaced Vice Adm. Robert L. Thomas who took a new assignment as director of Navy Staff for the Chief of Naval Operations.

There was another big change in 7th Fleet the following month, when USS Ronald Reagan (CVN 76) arrived Oct. 1, replacing USS George Washington as the Navy’s only forward deployed aircraft in the Indo-Asia-Pacific.

USS Benfold (DDG 65) and USS Chancellorsville (CG 62) also arrived in the 7th Fleet this year as part of the Navy’s rebalance to the Pacific. Both ships were fitted with the Aegis Baseline 9 combat system, which includes state of the art air defense, ballistic missile defense, surface warfare and undersea warfare capabilities. Chancellorsville’s upgrade was completed in 2013 and Benfold’s refit finished earlier this year.

When Benfold arrived in Yokosuka, Japan, Oct. 19, it became the 13th U.S. Navy warship on the waterfront, marking the largest presence in several decades since ships began forward deploying to Japan at the end of World War II.

Aucoin said 7th Fleet has “everything from the ships to the best aircraft. We are sending our best and our brightest out here across the board.”

Consisting of roughly 50-70 ships and submarines, 140 aircraft, and 20,000 Sailors, 7th fleet assets were underway more than a combined 7,200 days, including more than 650 days underway in the South China Sea.

“This port visit will give our Sailors and those of the PLA(N) a chance to foster the relationship that began at our last visit and share their experiences and cultures with one another," said Stethem's commanding officer, Cmdr. Harry L. Marsh, after pulling up to a pier in Shanghai.

While Lassen’s operations near the disputed islands in the South China Sea was the most high profile, FONOPs and Pacific presence operations (PPO) are a normal occurrence in 7th Fleet. U.S. Navy assets conducted over 90 FONOPs this year to challenge excessive claims and to protect the rights, freedoms, and lawful uses of the sea and airspace guaranteed to all countries. Seventh Fleet also conducted over 140 other presence operations to include transits through key straits and sea lanes.

Consistent freedom of navigation and presence operations are designed to advance strategic objectives in the Indo-Asia-Pacific. All operations are conducted in accordance with international law.

In early December, the “War Eagles” of Patrol Squadron (VP) 16 visited Singapore to display the multi-mission capabilities of the P-8A Poseidon maritime patrol aircraft. Senior military and government officials of Singapore flew aboard the P-8A during several demonstration flights, providing a glimpse of the capabilities the aircraft offers. As part of a U.S. and Singapore bilateral exchange, VP-16 personnel toured the Republic of Singapore Air Force base operations command while visiting.

“Future temporary detachments in Singapore will allow the U.S. maritime patrol and reconnaissance force to enhance our operational and crisis response reach in this vast area of responsibility while also improving interoperability with the Singapore Armed Forces and Republic of Singapore Navy,” said Captain Rich Prest, Commander Task Force 72, following the return of VP-16 to Naval Air Facility Atsugi.

For more than 70 years, 7th Fleet has maintained a continuous forward presence in the Indo-Asia Pacific, providing security and stability to the region.