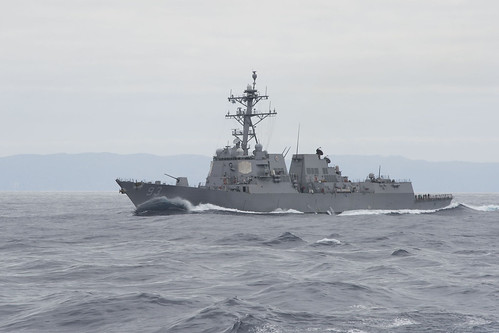 While deployed, Chung-Hoon and its crew of more than 300 Sailors will conduct theater security cooperation and maritime presence operations with partner nations.

The mission of Chung-Hoon is to conduct sustained combat operations at sea, provide primary protection for the Navy's aircraft carriers and battle groups, as well as serve as escort to Navy and Marine Corps amphibious forces and auxiliary ships, and conduct independent operations as necessary.

"Departing on deployment is a significant event in the life of all Sailors." said Cmdr. Tom M. Ogden, commanding officer of Chung-Hoon. "Months of training, maintenance, and preparations all make a ship ready for deployed operations. The crew has succeeded at every task leading up to this and deployment will be the capstone of those tremendous efforts."

Helicopter Maritime Strike Squadron (HSM) 37 Detachment 7, homeported at Marine Corps Base Hawaii, is scheduled to embark Chung-Hoon for the deployment. Detachment 7, known as "Paniolo," is scheduled to deploy with a total of 28 personnel and two MH-60R Seahawk helicopters, the U.S. Navy's primary anti-submarine and anti-surface warfare platform.

"I am very excited for the upcoming deployment onboard USS Chung-Hoon, and I am extremely proud of the 'Paniolo' pilots, aircrewmen, and maintainers for their hard work and preparation," said Lt. Cmdr. Justin Eckhoff, HSM-37 Detachment 7's officer-in-charge. "We are motivated and ready to employ our two MH-60R helicopters in diverse mission areas, including anti-surface and anti-submarine warfare, in order to meet the tasking of our ship, air wing, or strike group commander."

Chung-Hoon is assigned to Carrier Strike Group 3 and Destroyer Squadron 21 and is homeported in Hawaii as part of U.S. 3rd Fleet -- and is also part of the Great Green Fleet, an initiative that highlights the Navy's efforts to transform its energy use to increase operational capability.

Chung-Hoon was commissioned Sep. 18, 2004 and was named after Rear Adm. Gordon Pai'ea Chung-Hoon, who served during World War II and was the first Asian American flag officer. He is a recipient of the Navy Cross and Silver Star for conspicuous gallantry and extraordinary heroism as commanding officer of USS Sigsbee from May 1944 to October 1945.