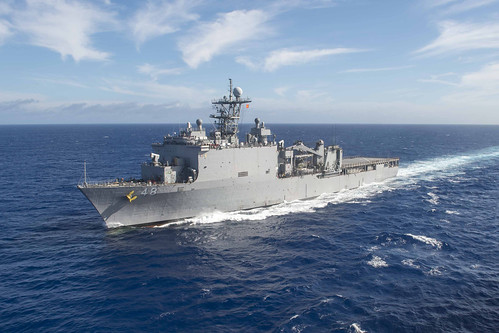 During her patrol, Ashland will embark Marines from the 31st Marine Expeditionary Unit (MEU).

“My crew, from the most veteran Sailor down to the newest Sailor, is ready and excited to get out to sea and integrate with the 31st MEU,” said Cmdr. Daniel P. Duhan, commanding officer of Ashland. “The blue-green team will emerge from the patrol as a more cohesive unit, well versed in amphibious operations.”

Ashland’s crew spent the last few months preparing for their routine patrol and they are eager to begin training with the Marines.

“I am excited to be a part of Ashland’s crew for my first underway,” said Electronics Technician 3rd Class Petty Officer Elizabeth Hornbeck, a Sailor who recently reported aboard Ashland. “The Navy has prepared me to adapt to many things and I can’t wait to work alongside the Marines.”