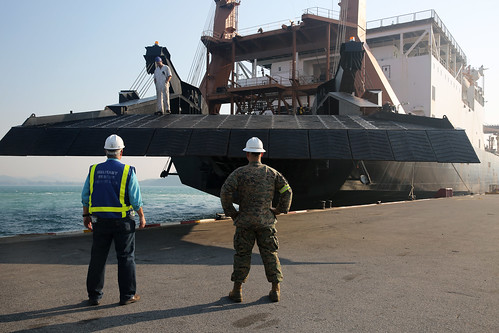 Thailand and the United States are scheduled to co-host the annual, multilateral Exercise CG-16 in various areas throughout the Kingdom of Thailand Feb. 9-19. This year’s CG-16 will consist of three primary events: a command post exercise, which includes a senior leader seminar; humanitarian civic assistance projects in Thai communities; and a field training exercise that will build regional relationships.

Phase one of the offload was conducted here then the Pless sailed to the port of Sattahip in Chuk Samet to offload the remainder of gear, Jan. 28. From the ports, all equipment was staged and will be transported to various locations in Thailand.

During the exercise, MSC falls under the Joint Movement Coordination Center (JMCC) and works with various agencies, such as the Surface Deployment and Distribution Command (SDDC).

“The JMCC is the coordination center for all inbound and outbound cargo,” said Army Maj. Juan A. Vega, JMCC officer-in-charge for CG-16. “This includes sealift, port handling and transportation. Our job is to receive the equipment at the port, and coordinate transportation to its final destination.”

At the port of Sattahip, MSCFE stood up a mobile sealift operations center (MSOC), a fly-away communications suite that is staffed by Expeditionary Port Unit 111 (EPU 111), out of Oklahoma City, Okla. The MSOC consists of two shipping containers: one is a storage facility and one is outfitted with a full complement of communications equipment.

“The EPU is here to train on port operations for contingency support,” said Cmdr. Christopher M. Cassano, MSCFE exercise planner. “The EPU would rarely be used during peacetime, but in a contingency operation, when we’re at a dozen different ports, we have the EPU to exercise control at the port for MSC. Because during phase two operations there would be no port agent—we’d be responsible for all things in support of the ships.”

“Cobra Gold is the first leg of Pacific Pathway 16-1,” said Joseph Peck, traffic manager, USARPAC. “We take a single vessel and a single task force and take it to numerous exercises. It saves money, cuts legs off transportation and allows us to bring a bigger force with more capability to the exercises.”

The Pless started the PP 16-1 mission at Joint Base Lewis–McChord (JBLM) in Tacoma, Wash. “She then loaded the aviation task force in Hawaii, then went to Okinawa, Japan and picked up joint-forces gear that supports the exercise,” said Peck.

Upon conclusion of CG-16, the Pless will backload the ship at the end of February, and then roll over to South Korea to offload the Army force for Exercise Foal Eagle. She will then swing back to Okinawa to offload Marine Corps equipment, and upload the new Marine gear for Exercise Balikatan. The ship will come back to South Korea to pick up the Army force, and then move to the Philippines to offload for Balikatan. Finally, she will reverse sequence back to JBLM to drop off the remainder of the joint task force.

“PP 16-1 consolidates a force on a vessel and keeps it out so it does multiple iterations of loading and offloading a vessel,” said Peck. “This is a five-and-a-half-month mini deployment to three different countries, which we would have loaded the ship at least five times.”

Exercise Cobra Gold, one of the largest multilateral exercises in the Asia-Pacific region and has taken place annually for more than 30 years. CG-16, the 35th version of the military exercise, will bring together more than two dozen nations to address regional and global security challenges and to promote international cooperation and stability within the region. 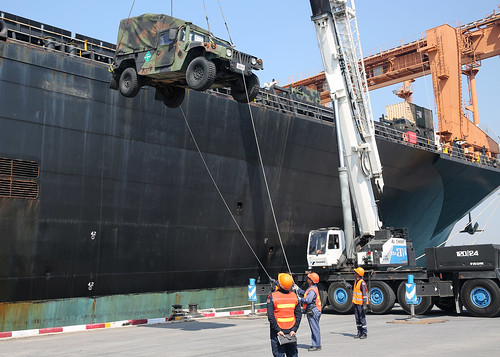