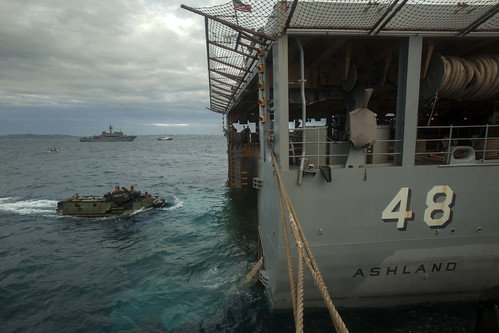 During the onload, Ashland Sailors worked alongside the Marines to load vehicles and equipment necessary to conduct amphibious operations and participate in multinational exercises throughout the Indo-Asia-Pacific region.

“Ashland is at its highest readiness to embark Marines,” said Lt. Kyle Reckler, first lieutenant aboard Ashland. “The splash and recovery of the amphibious assault vessels (AAV) was a great example of positive flexing from both the Navy and Marine Corps to load the AAVs in a safe and efficient manner.”

While Ashland Sailors have been preparing for this patrol for the past few months aboard the ship, the 31st MEU has been busy training for the upcoming exercises on the shore.

“The 31st MEU does a good job of making sure we understand our mission set and capabilities,” said 1st Lt. Andrew Powell, the team embarkation officer for the 31st MEU. “When we are preparing for what we could possibly do across the range of military operations. The MEU conveys the message and gives realistic training to make sure we are mission ready.”