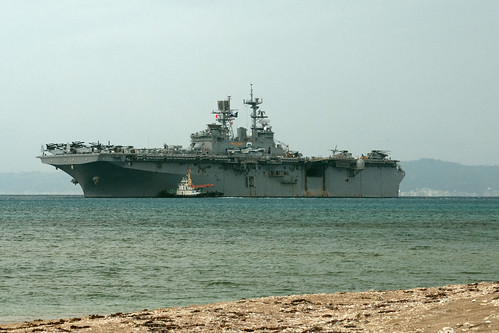 OKINAWA, Japan - The Bonhomme Richard Amphibious Ready Group (ARG) wrapped up its onload of the 31st Marine Expeditionary Unit (MEU) Feb. 5 as part of a scheduled patrol of the U.S. 7th Fleet area of operations.

“Integration with the Marines is essential to conducting the full range of amphibious operations at sea,’” said Capt. Ed Thompson, Commodore of Amphibious Squadron Eleven. “Having the 31st MEU aboard allows the BHR ARG to support a variety of complex objectives from air, land and sea.”

Aboard Bonhomme Richard the embarkation began with a fly on of the Aviation Combat Element (ACE). The aviation department and the MEU’s Combat Cargo team managed the logistics of embarking over 200 personnel and attached aircraft.

“This was actually the first time that we embarked the ACE before we picked up the Marines on shore,” said Gunnery Sgt. Jesse Rubens, combat cargo assistant aboard Bonhomme Richard. “We usually have the ACE fly on once we leave port, but this time we were able to accomplish the evolution smoothly beforehand.”

Once moored at White Beach Naval Facility, Sailors and Marines transported vehicles and equipment to the Bonhomme Richard’s well deck and hangar bay via cranes and forklifts. Coordinators compared the task of moving the tons of trucks, humvees, and large metal containers to a real-life game of Tetris.

“It takes months of coordination and preparation to load all of the equipment and gear safety and efficiently,” said Rubens. “Planning for the next onload begins as soon as the current one ends.”

Sailors welcomed Marines as they marched their personal belongings to the quarterdeck. For many Marines, this is their first time out to sea. Many of whom were doing this for the first time.

“I’m excited for this patrol,” said Cpl. Nikko Olalia, assigned to the 31st MEU. “I look forward to learning and seeing new things through working with the Navy.”

Ashland is participating in the U.S. and Thailand co-sponsored joint exercise Cobra Gold. The exercise is designed to enhance and advance the security commitments in the Indo-Asia Pacific.